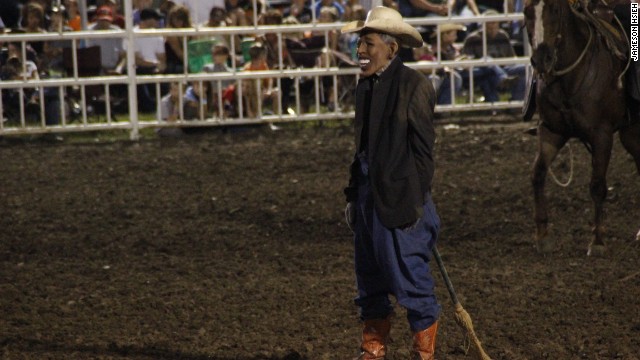 "I didn't think anything more of it than what we've done 15 years ago, ten years ago, five years ago, when we've done it with Bush, Clinton and Ronald Reagan," Tuffy Gessling told CNN Kansas City affiliate KCTV.

Asked whether he was a Republican or Democrat, Gessling said simply, "I'm a rodeo clown."

The stunt that landed him in hot water happened earlier this month when he was performing at the Missouri State Fair. While another clown donned an Obama mask and held a broom descending from his backside, Gessling said, "Hey, I know I'm a clown. He's just running around acting like one. Doesn't know he is one."

The response was quick. Aside from the Missouri State Fair ban, the president of the Missouri Rodeo Cowboy Association resigned. Missouri lawmakers condemned the incident.

Gessling described a vitriolic reaction after the national outcry over his act.

"I've had one lady spit in my face, called me a dirty name, spit in my face and walked off," Gessling told KCTV. "I've had somebody threaten to run me over. One of them wanted to burn the house down."

But the routine, which some labeled racist, had nothing to do with skin color, Gessling claimed.

"I never did anything because of anybody's race. I don't care what color somebody is. If they're blue, white, green, polka dotted, striped ... it doesn't bother me one bit," he said, adding later he'd be "honored" to shake Obama's hand.