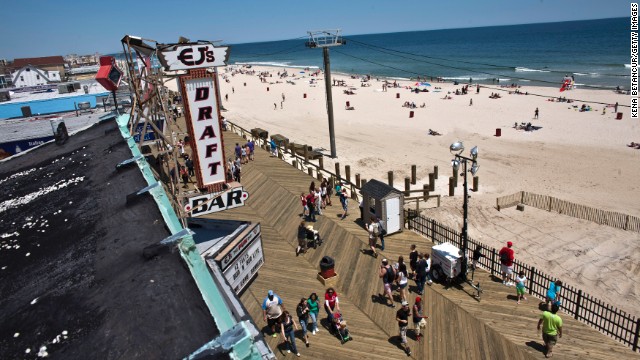 The Republican governor said the effort is an "example of how federal and state agencies can work together" to "develop new technology that will keep our people and our technology on the move for decades to come."

Christie says Sandy caused 68% of Garden State residents to experience power outages and the state's rail system suffered an estimated $400 million of damage during the storm.

The proposal, which is expected to be carried out by the Department's Sandia National Laboratories, the NJ Transit and Board of Public Utilities, is the first non-military micro energy grid in the country, Christie said. Moniz said it will "help New Jersey lead the way" and ensure the state is ready for the next major event.

Christie was a top surrogate for Republican presidential nominee Mitt Romney when the storm slammed into the northeast just days before the November 2012 election He's received criticism for his embrace of President Obama and the administration in the aftermath of the storm but has insisted he will act for his state, regardless of party. In addition to his appearance Monday with Moniz, Christie toured storm impacted areas earlier this year with the president and last week with Housing and Urban Development Secretary Shaun Donovan.

The Obama administration recently released a report, conducted post-Sandy, that details 69 recommendations to rebuild areas hit hardest by the hurricane and suggestions to improve communication systems and electrical grids along the East Coast.

Standing in a New Jersey train terminal named for the late Sen. Frank Lautenburg, Chrisite, the Republican firebrand, said projects like the micro grid will hopefully allow institutions like hospitals and water treatment plants to be taken off the larger grid and create jobs in his state.

Christie has invested heavily in an ad campaign to bring tourists to his state, the fruits of which were viewed by Moniz as he landed at Newark airport Monday.

"I think is citizens have shown remarkable resilience on their own during the aftermath and now this is the time getting to infrastructure with the same resilience," Moniz said.