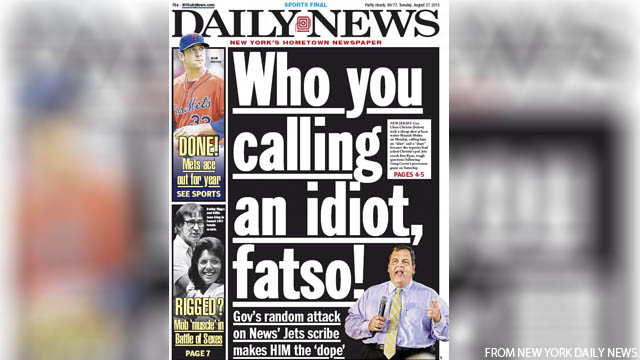 Newspaper fires back after Christie unleashes on reporter

(CNN) - Chris Christie has been clear he's no fan of reporters.

But after he called one an "idiot" on Monday, one newspaper fired back.

"Who you calling an idiot, fatso!" blared the headline of the New York Daily News.

The banner was backed up by one of paper's columnists, Mike Lupica, who said Christie should "pick on someone his own size" rather than Daily News a sports writer.

Mehta and other reporters questioned the New York Jets' decision to play quarterback Mark Sanchez in the fourth quarter of a Sunday night pre-season game, when he suffered a shoulder injury. He was put in to relieve the team's rookie quarterback, who played the first three quarters of that matchup with the New York Giants.

Christie said on the show that the conversation shouldn't be about Mehta, and rather "it should be about the Sanchez decision and we shouldn't be giving this dope the amount of airtime we've given him already."

The collumnist suggested that maybe Christie was siding with the Jets coach over the reporter because "they both have undergone lap-band surgery the past couple of years, maybe it's some kind of Lap-Band of Brothers deal."