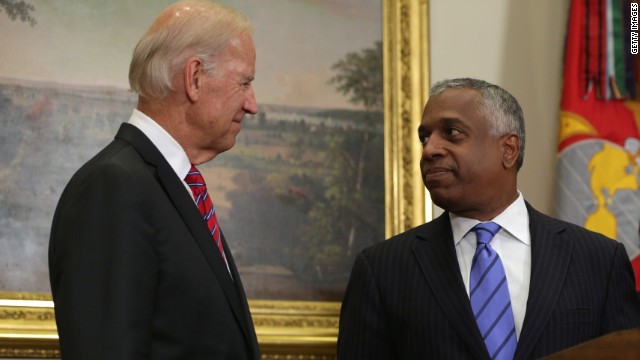 Washington (CNN) - During a ceremony at the White House on Thursday morning to swear in Todd Jones as the new director of the Bureau of Alcohol, Tobacco, Firearms and Explosives, Vice President Joe Biden announced two new executive actions intended to address the problem of gun violence.

Even as that effort failed, President Barack Obama and Biden hit the road for a series of campaign-style events making their case for reforms.

The first action closes a loophole that could allow individuals prohibited from purchasing certain restricted weapons to do so legally by registering them under the name of a trust or corporation. Calling this "an easy way to evade the required background checks," Biden said this new proposed rule, issued by ATF, would require individuals attempting to register firearms under a trust or corporation to be subject to the same background checks as individual gun purchasers.

"Last year alone there were 39,000 requests for transfer of these restricted firearms to trusts or to corporations," Biden said.

The second action addresses U.S. military firearms sold or transferred to foreign allies. Currently the government must approve any re-importation of these weapons back to the United States, but the rule announced Thursday would deny nearly all such requests. The vice president said that since 2005, the government has approved the transfer of more than 250,000 of these firearms.

"We're ending the practice of allowing countries to send back to the United States these military weapons to private entities," Biden said. "Period. Period. The new policy's going to help keep military-grade firearms off our streets."

Before proceeding to the ceremonial swearing-in, Biden once again called on Congress to take action on the administration's gun control proposals, saying that legislative action was the "best way to reduce gun violence."

"If Congress won't act, we'll fight for a new congress," Biden said. "It's that simple."