(CNN) - As we count down to the re-launch of Crossfire, our new hosts are looking back at amazing moments from the program’s 23-year history.

Newt Gingrich shows a night in 1988 when figures from the Kennedy and Bush eras debate U.S. defense. Former Secretary of Defense Robert McNamara and about-to-be Vice President Dan Quayle were in the Crossfire discussing the Soviet Union’s military defense capabilities in the final days of the socialist state. 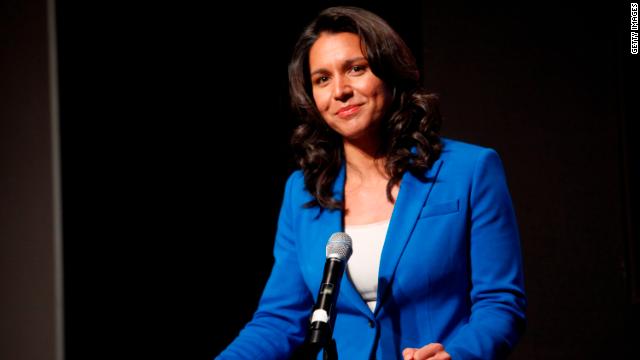 Man who allegedly threatened to decapitate congresswoman kept in jail

(CNN) - A man who allegedly threatened to decapitate Rep. Tulsi Gabbard of Hawaii appeared in court in San Diego, California, Friday and was ordered to remain in jail for now.

Aniruddha Sherbow made two threats to murder the Democratic congresswoman earlier this month, according to newly unsealed court documents.

ALL EYES ON SYRIA: OBAMA MAKES HIS CASE; SAYS SYRIAN ATROCITIES THREATEN U.S. NATIONAL INTEREST: “This kind of attack is a challenge to the world. We cannot accept a world where women and children and innocent civilians are gassed on a terrible scale. This kind of attack threatens our national security interests by violating well established international norms against the use of chemical weapons by further threatening friends and allies of ours in the region, like Israel and Turkey, and Jordan and it increases the risk that chemical weapons will be used in the future and fall into the hands of terrorists who might use them against us.”

OBAMA SAYS HE “MEANT WHAT HE SAID”: “So, I have said before, and I meant what I said that, the world has an obligation to make sure that we maintain the norm against the use of chemical weapons. …
END_OF_DOCUMENT_TOKEN_TO_BE_REPLACED

Washington (CNN) - Declaring himself "war-weary" but determined to hold Syria accountable for using banned chemical weapons, President Barack Obama said Friday he was considering a limited response to what U.S. intelligence assessed with "high confidence" as a Syrian attack that killed more than 1,400 people.

A full transcript of this Cabinet Room remarks follows. Omitted from the transcript are remarks by the presidents of Estonia, Luthuania and Latvia, with whom the president was meeting.

OBAMA: Well, obviously, I'm - I'm very grateful to have my fellow presidents here, as well as the vice president. Before I begin, I want to say a few words about the situation in
Syria. As you've seen, today we've released our unclassified assessment detailing with high confidence that the Syrian regime carried out a chemical weapons attack that killed well over 1,000 people, including hundreds of children. This follows the horrific images that shocked us all.
END_OF_DOCUMENT_TOKEN_TO_BE_REPLACED

Liz Cheney: 'I am not pro-gay marriage'

(CNN) – A carefully worded statement from Liz Cheney Friday explained the Wyoming Senate candidate wasn't supportive of same-sex marriage, despite having a sister who married her longtime partner in Washington, D.C., last year.

"I am strongly pro-life and I am not pro-gay marriage," Cheney wrote. "I believe the issue of marriage must be decided by the states, and by the people in the states, not by judges and not even by legislators, but by the people themselves."
END_OF_DOCUMENT_TOKEN_TO_BE_REPLACED 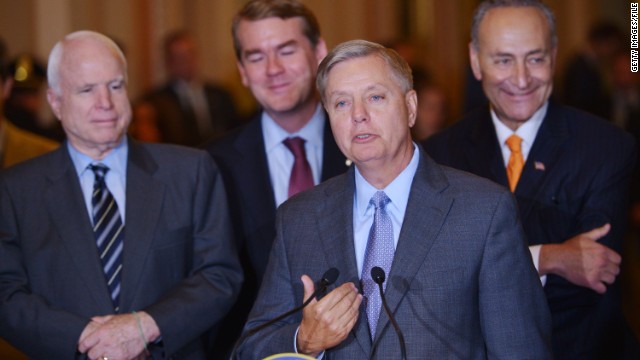 Who can beat Lindsey Graham?

Columbia, South Carolina (CNN) - Since the elections of 2010, when a tide of grassroots fervor swept through the state and vaulted a bumper crop of fresh-faced conservative leaders into office, South Carolina's Republican political establishment has been drastically reshaped.

The state's governor, Nikki Haley, is a 41-year -old Indian-American. Tim Scott is the first African-American to represent the state in the United States Senate.

Kerry said the American intelligence community has "high confidence" in what he called evidence and facts that the Syrian regime used chemical weapons, adding that "the questions is what are we ... in the world going to do about it."

He spoke as the government released an assessment by the U.S. intelligence community of the alleged August 21 attack.

"We assess with high confidence that the Syrian government carried out the chemical weapons attack against opposition elements in the Damascus suburbs," the report said.

Her spokesman suggested she would be open to resuming the speakership if elected to the position, and said they asked for a correction to the edited version of the interview published in The National Journal on Thursday.
END_OF_DOCUMENT_TOKEN_TO_BE_REPLACED

(CNN) – As President Barack Obama deliberates potential military action in Syria, Sen. Rand Paul says the administration is backing a plan that would end in stalemate for the troubled nation.

Former President George W. Bush, in an interview, said Obama has a "touch choice to make" on potential U.S. military action against Syrian President Bashar al-Assad, who is accused of using chemical weapons against civilians.
END_OF_DOCUMENT_TOKEN_TO_BE_REPLACED