Washington (CNN) - Declaring himself "war-weary" but determined to hold Syria accountable for using banned chemical weapons, President Barack Obama said Friday he was considering a limited response to what U.S. intelligence assessed with "high confidence" as a Syrian attack that killed more than 1,400 people.

A full transcript of this Cabinet Room remarks follows. Omitted from the transcript are remarks by the presidents of Estonia, Luthuania and Latvia, with whom the president was meeting.

OBAMA: Well, obviously, I'm - I'm very grateful to have my fellow presidents here, as well as the vice president. Before I begin, I want to say a few words about the situation in
Syria. As you've seen, today we've released our unclassified assessment detailing with high confidence that the Syrian regime carried out a chemical weapons attack that killed well over 1,000 people, including hundreds of children. This follows the horrific images that shocked us all.

This kind of attack is a challenge to the world. We cannot accept a world where women and children and innocent civilians are gassed on a terrible scale. This kind of attack threatens our national security interests by violating well established international norms against the use of chemical weapons by further threatening friends and allies of ours in the region, like Israel and Turkey, and Jordan and it increases the risk that chemical weapons will be used in the future and fall into the hands of terrorists who might use them against us. So, I have said before, and I meant what I said that, the world has an obligation to make sure that we maintain the norm against the use of chemical weapons.

Now, I have not made a final decision about various actions that might be taken to help enforce that norm. But as I've already said, I have had my military and our team look at a wide range of options. We have consulted with allies. We've consulted with Congress. We've been in conversations with all the interested parties, and in no event are we considering any kind of military action that would involve boots on the ground, that would involve a long-term campaign. But we are looking at the possibility of a limited, narrow act that would help make sure that not only Syria, but others around the world, understand that the international community cares about maintaining this chemical weapons ban and norm. 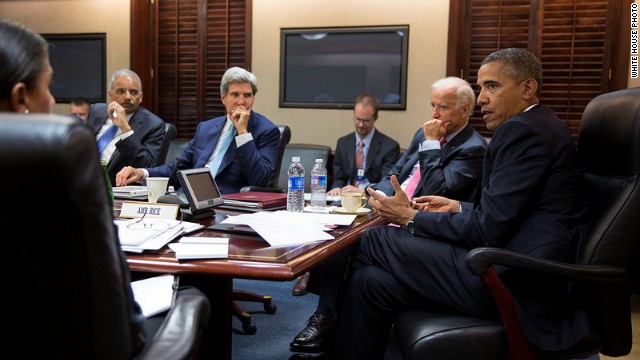 Again, I repeat, we're not considering any open-ended commitment. We're not considering any boots on the ground approach. What we will do is consider options that meet the narrow concern around chemical weapons, understanding that there's not going to be a solely military solution to the underlying conflict and tragedy that's taking place in Syria. And I will continue to consult closely with Congress. In addition to the release of the unclassified document, we are providing a classified briefing to congressional staff today. And we'll offer that same classified briefing to members of Congress as well as our international partners. And I will continue to provide updates to the American people as we get more information. With that, I want to welcome, President Ilves, President Grybauskaite, and President Berzins to the White House. These countries that they represent all share very deep ties to the United States, both as allies and, because of extraordinary people, the people relations that we have with these countries.

I want to thank all the presidents who are here and their nations for all that they do to promote democracy, not only in their own countries, but around the world. And the Baltics are among ourmost reliable allies in NATO. And our commitment to their security is rock-solid. Our soldiers sacrifice together in Afghanistan, and the Baltic ports continue to help support our troops as we transition the NATO mission. Today we're gonna spend some time talking about our shared commitments to the Transatlantic Trade and Investment Partnership negotiations, which will add jobs in the Baltics and the United States. We're working on development assistance projects, including
building institutions and strengthening civil society in the emerging democracies of Eastern Europe and Central Asia. We will, obviously, have discussions about our NATO relationships and the security concerns that we share together. So, again, I've had occasions to meet with all three presidents in a wide variety of settings and a wide variety of summits. They have been outstanding friends of the United States of America. We are very proud of them. And I want to thank each of them for their leadership. We know how far Estonia, Latvia and Lithuania have come in just the past few decades, and I know that we'll accomplish even more in the decades to come.

[Remarks by the presidents of Estonia, Luthuania and Latvia are omitted]

QUESTION: Syria and as long as you focus (inaudible) either the United States or Congress, particularly (inaudible) opportunity.

OBAMA: We are still in the planning processes. And, obviously, consultations with Congress, as well as the international community are very important. And, you know, my preference, obviously, would have been that the international community already acted forcefully. But what we have seen, so far at least, is a incapacity at this point for the Security Council to more forward in the face of a clear violation of international norms. And, you know, I recognize that all of us here in the United States, in Great Britain and many parts of the world, there's a certain weariness given Afghanistan. There's a certain suspicion of any military action post-Iraq. And I very much appreciate that.

On the other hand, it's important for us to recognize that when over 1,000 people are killed, including hundreds of innocent children, through the use of a weapon that 98 percent or 99 percent of humanity says should not be used, even in war, and there is no action, then we're sending a signal that that international norm doesn't mean much, and that is a danger to our national security. And obviously if and when we make a decisions to respond, there are a whole host of considerations that I have to take into account too in terms of how effective it is, and given the kinds of options that we're looking at, that would be very limited, and would not involve a long-term commitment or a major operation, you know, we are confident that we can provide Congress all the information they can get, all the input that they need. And we're very mindful of that. And we can have serious conversations with our allies and our friends around the world about this.

But ultimately we don't want the world to be paralyzed. And, frankly, you know, part of the challenge that we end up with here is that a lot of people think something should be done, but nobody wants to do it. And that's not an unusual situation, and that's part of what allows, over time, the erosion of these kinds of international prohibitions unless somebody says, "No. When the world says we're not gonna use chemical weapons, we mean it."

And it would be tempting to leave it to others to do it. And I've - I think I've shown consistently and said consistently my strong preference for multilateral action whenever possible. But it is not in the national security interest of the United States to ignore clear violations of these kinds of international norms, and the reason is because there are a whole host of international norms that are very important to us. You know, we have currently rules in place dealing with the proliferation of weapons of mass destruction. We have international norms that have been violated by certain countries and the United Nations has put sanctions in place, but if there's a sense that, over time, nobody's willing actually to enforce them, then people don't take them seriously.

So, you know, I am very clear that the world generally is war weary, certainly the United States, is has gone through over a decade of war. The American people understandably want us to be focused on the business of rebuilding our economy here and putting people back to work, and I assure you nobody ends up being more war weary than me. But what I also believe is that part of our obligation as a leader in the world is making sure that when you have a regime that is willing to use weapons that are prohibited by international norms on their own people - including children - that they're held to account.