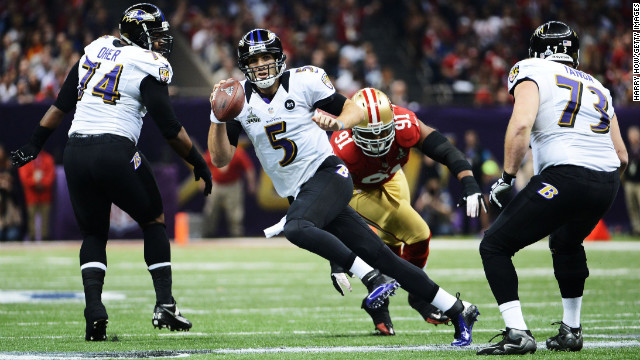 Washington (CNN) - While the National Football League decided against teaming up with the Obama administration to promote health care reform, individual teams are free to work with states on educational campaigns for open enrollment.

And this year's Super Bowl champs, the Baltimore Ravens, are doing just that.

Maryland Lt. Gov. Anthony Brown announced Tuesday the state-based health insurance marketplace and the NFL team will partner this fall to educate football fans on open enrollment for the state's marketplace once it opens on October 1.

"Research shows that 71 percent of the uninsured population in Maryland have watched, attended or listened to a Ravens game in the past 12 months," the announcement stated. "The partnership will provide Maryland Health Connection with the opportunity to reach and engage fans while making them aware of the new opportunity they have for health coverage beginning this fall through the health insurance marketplace."

The NFL said in June it had "no plans" to work with the Obama administration to promote health care reform after Health and Human Services Secretary Kathleen Sebelius said a "variety of sports affiliates" had been "very actively and enthusiastically engaged" with the administration over the idea.

Two top Republicans in the Senate had cautioned the league against teaming up for the project, saying in a letter the NFL would "risk damaging" its nonpartisan reputation by getting involved in a highly divisive issue.

NFL Commissioner Roger Goodell said Wednesday that while the league as a whole decided not to participate, they're not discouraging individual franchises from taking part.

"These are decisions that I think each club's got to make," he said on CBS' "This Morning." "We as a league decided not to do that but allow our clubs to enter into agreements where they feel it is to be beneficial. The Ravens have made that decision and we support them."

In talking about pairing up with sports affiliates back in June, Sebelius pointed to the example set by the Boston Red Sox, who worked with the commonwealth of Massachusetts in 2007 to urge residents to sign up for the state's health insurance plan. The team used television ads to get out the message, and Fenway Park hosted a health care kiosk at home games and held a themed health care night. They also included informational inserts in their programs.

"We know the Red Sox were incredibly effective in Massachusetts … so it's a logical place to go," Sebelius told reporters Monday.

Sen. Marco Rubio, R-Florida, wrote a letter to Sebelius on Tuesday, blasting the health and human services secretary for plans to spend $8.7 million on a media blitz to promote the exchanges.

"Until critical questions can be answered regarding the availability and type of health insurance to be provided by ObamaCare, it is unconscionable to spend taxpayer dollars to promote and advertise ObamaCare plans that have yet to be finalized," he wrote.

The ad buy is scheduled to run from September 30 to December 1 in large markets in Texas, Florida, Tennessee, Georgia, Pennsylvania, Arizona, North Carolina, Indiana, Louisiana and Oklahoma, according to information obtained from an ad buyer by Rubio's office.

In August, the Centers for Medicare and Medicaid Services announced $67 million in grant money from the health and human services department for groups and individuals that will help Americans shop and enroll in the marketplaces this fall.

Not satisfied with the upcoming roll-out of Obamacare, the Republican National Committee on Wednesday launched a new website, ObamaCareCosts.org, that intends to inform readers with "information they can use to hold Democrats accountable for the disastrous law."

The RNC will release a web video each week of real news stories on the costs of Obamacare, according to a release about the campaign.

"We see it in the news every day now: ObamaCare is killing jobs, hurting our economy, raising premiums, and limiting healthcare access," said RNC Chairman Reince Priebus. "It hurts the very people we were told it would help.

"With less than a month to go before this disastrous law begins to take full effect, Democrats bear sole responsibility for ObamaCare's costs," he said.