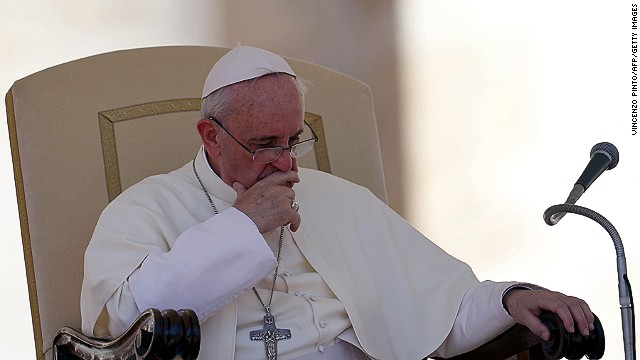 BREAKING… MANCHIN IS A NO: Obama loses another Democrat as West Virginia Senator Joe Manchin issues a statement saying he will vote no: “Given the case that has been presented to me, I believe that a military strike against Syria at this time is the wrong course of action.”

CNN VOTE COUNT: OBAMA A LONG WAY FROM CONGRESSIONAL APPROVAL ON SYRIA… Obama needs at least 216 votes in the House to secure his resolution. In that chamber, there are nearly four “no” votes for every “yes” at the moment. According to CNN's count, 102 members plan to vote "no," while 26 - including a number of high profile Republicans - plan to back it. – Dan Merica and Lisa Desjardins

TRAIL TRIVIA
(Answer below)
Who is the highest-ranking military official ever elected to Congress?

When Jorge Bergoglio was elected Pope Francis, he made it clear that he was going to be a different kind of Pope – a more humble, outspoken, man of the people.

And today, Francis lived up to that reputation by asking world leaders to keep their armies out of Syria.

“To the leaders present, to each and every one, I make a heartfelt appeal for them to help find ways to overcome the conflicting positions and to lay aside the futile pursuit of a military solution,” the Catholic leader wrote in an open letter to the heads of state attending the G-20 Summit. “Rather, let there be a renewed commitment to seek, with courage and determination, a peaceful solution through dialogue and negotiation of the parties, unanimously supported by the international community.”

This is not the first time the pope has weighed in on the incredibly complex and volatile situation in Syria. Earlier this week, he tweeted “War never again! Never again war!” and “With utmost firmness I condemn the use of chemical weapons.”

All of this tracks with the kind of Catholic leader Francis was expected to be.

In Brazil, he told young people to be “athletes of Christ,” urging them to proudly support their religion like they would a sports team.” During a Mass in May, shortly after he became pope, he said that his church needed believers with “zeal,” not people to “take refuge in an easy life or in a cozy world.”

By weighing in on Syria – with zeal – the pope is certainly living the message.

Leading CNNPolitics: House Dems proving a tough sell for Obama on Syria
A Senate committee's approval of a resolution authorizing military force against Syria gave some momentum to President Barack Obama's effort to win overall congressional support for the effort, but conference calls involving members of his own party indicate that it's still an uphill battle in the House. – Deirdre Walsh

Leading Drudge: Putin: 'Kerry Is Lying'
Things aren't exactly warming up between the Obama administration and Vladimir Putin, even as President Obama arrives in St. Petersburg for the G-20 summit. Putin called Obama Secretary of State John Kerry a liar over Kerry's testimony this week before Congress.

Leading HuffPo: Pissing Match
The North Carolina GOP is having a big fight over making poor people pee in cups. First, Republicans in the state legislature, with some Democratic support, passed a bill requiring drug tests for some people seeking benefits from the federal Temporary Assistance for Needy Families program, commonly known as welfare. Then Gov. Pat McCrory (R) vetoed the bill, calling it a bad way to fight drug abuse. On Wednesday, Republicans in the statehouse voted to override McCrory's veto, but the first-term governor still won't cooperate. – Arthur Delaney

Leading Politico: Obama's political arm sits out
Barack Obama’s supporters built a political organization to pressure Congress to build public support for him. Yet on one of his biggest efforts since Organizing for Action re-launched early this year — the push to convince Congress to adopt a use-of-force authorization against Syria — the group has so far sat on the sidelines. – Reid Epstein

Leading The New York Times: Obama Faces Barrier in His Own Party on Syria
Democrats say they are confronted with a difficult choice: go against the wishes of President Obama or defy voters who are overwhelmingly opposed to involving the United States in another unpredictable Middle East war. – Jeremy Peters

- ‘They don’t know what I know’ -
DEMOCRATIC SEN. DIANNE FEINSTEIN, INTELLIGENCE COMMITTEE CHAIRWOMAN, IN A STATEMENT TO REPORTERS ON CAPITOL HILL: “There is no question that what is coming in is overwhelmingly negative. There is no question about that. But you see, then they don’t know what I know. They haven’t heard what I heard. And I like to believe now after 20 years, I have some skill in separating the wheat from the chaff in this thing.”

- Republican lawmaker who supported Obama’s Syria plan changes mind -
REPUBLICAN REP. MICHAEL G. GRIMM OF NEW YORK IN A WRITTEN STATEMENT: “I have heard from many constituents who strongly oppose unilateral action at a time when we have so many needs here at home. Thus, after much thought, deliberation and prayer, I am no longer convinced that a U.S. strike on Syria will yield a benefit to the United States that will not be greatly outweighed by the extreme cost of war.”

- Calling for an Oval Office address -
DEMOCRATIC REP. SHEILA JACKSON LEE OF TEXAS IN A STATEMENT TO REPORTERS ON CAPITOL HILL: “I think more than anyone else, the Commander-in-chief of the nation would be an excellent person to articulate both his mission, his passion, and what is the impact and danger of chemical weapons.”

Gut Check Full Service: In response to a question on a possible Oval Office address, Kerry signaled Obama could give one… “I have no doubt the president will.”

- Putin knocks U.S. in G-20 opening -
RUSSIAN PRESIDENT VLADIMIR PUTIN IN HIS OPENING REMARKS AT THE G-20 SUMMIT: “The U.S. economy is growing which is very encouraging. However it is not growing fast enough. For the first time over many years we see the Japanese economic growth unfortunately without guarantees of the stability of this trend. The E.U. countries have shown only the first signs of the end.”

Jake Sherman (@JakeSherman)
Joe Wilson, who takes to the floor nearly every day and mentions the "global war on terror," is against Syria intervention.

Nefi Alarcon (@NefiCNN)
W.H. Chief of Staff Denis McDonough will be a guest on @CNNsotu this Sunday to talk about Syria & the upcoming Congressional votes on Syria

Marissamayer (@marissamayer)
Geeking Out on the Logo – So, tonight we unveiled the new Yahoo logo, concluding our 30 days of change. We... http://tmblr.co/Z4v08suCJliF

Stefan Becket (@stefanjbecket)
One of these days Yahoo's exclamation point will make for some weird headlines. "52 Die in Tragic Fire at Yahoo!"

When Joe Sestak was sworn in to represent Pennsylvania’s 7 District in 2007, he became the highest-ranking member of the military to ever serve in Congress.

Sestak is a former Navy three-star Admiral who graduated from the Naval Academy in 1974.

“He has served six sea tours with units of the Atlantic and Pacific Fleets during which he made seven deployments to Europe, the Persian Gulf and the western and South Pacific,” his Navy biography reads. “He served in command of USS Samuel B. Roberts named the best overall surface ship in the Atlantic Fleet in the Battenberg Cup selection, and as Commander, Destroyer Squadron Fourteen.” LINK
http://www.navy.mil/navydata/bios/bio.asp?bioID=257

Congrats to Logan Dobson (@LoganDobson) for correctly answering today’s trivia question. I think it was a guess – but it was correct.