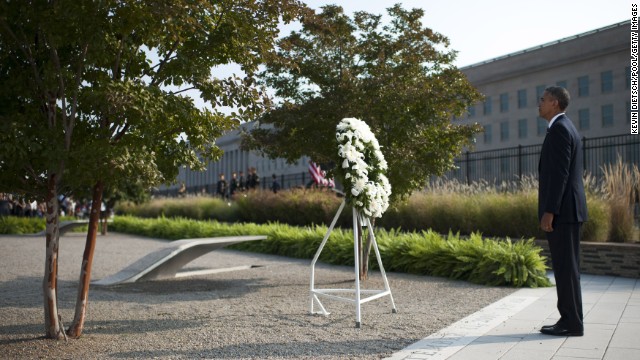 WAR CRIMES ON BOTH SIDES: U.N. REPORT: ABUSES ON BOTH SIDES OF SYRIAN CIVIL WAR… Government forces continue to attack civilian populations in what amounts to crimes against humanity, the U.N. said in a report released Wednesday. But anti-government groups, in their fight against President Bashar al-Assad, have themselves committed war crimes, including murder, torture and hostage-taking, the U.N stated. – Mariano Castillo

12 YEARS LATER: JIHADIST TERRORISM IN AMERICA SINCE 9/11… The Boston Marathon bombings in April, however, serve as a reminder that the United States still faces a terrorism threat from disaffected U.S. citizens and residents who are influenced by al Qaeda's ideology. – Peter Bergen and David Sterman

TRAIL TRIVIA
(Answer below)
After the terrorist attacks of September 11, 2001, what country organized “Operation Yellow Ribbon?”

Who hasn't asked this question to friends when talking about the horrific terrorist attacks of September 11th, 2001? For most people, the answer is ordinary – math class, the grocery store, the dentist – but no less forgettable.

Ari Fleischer, President George W. Bush's press secretary on September 11, is not one of those people. His front row seat to history is a compelling story and 12 years after the day the towers fell, Fleischer is tweeting his historic perspective on the day that changed America.

It caught – and held – our eye on the day that #UnitedWeStand, #wherewereyou and #neverforget trended on Twitter. Here is a sampling of compelling tweets from @AriFleischer:

9:49 AM: The scene in the presidential holding room at the Emma Booker Elementary School in Sarasota, FL. http://instagram.com/p/eH1FWHyvNb/

10:49 AM: I learned years after 9/11 that AF1 Capt. Tillman ordered an armed AF Security man 2guard the stairs leading 2the cockpit.

11:44 AM: Bush calls Rumsfeld:"It's a day of national tragedy. We'll clean up the mess & then the ball will be in your court 2respond."

12:32 PM: Aboard AF1. Bush to Secret Service (USSS) & Andy: "I want 2go back home ASAP. I don't want whoever this is holding me outside Washington."

1:18 PM: We landed at Andrews AFB and boarded Marine One for the WH. Below us, the smoldering Pentagon was visible from Marine One.

For more on Fleischer's unique vantage point on this tragic day, check out his Twitter feed – @AriFleischer. Trust us, you won't be disappointed.

Leading CNNPolitics: All eyes turn to Geneva talks on Syria
Secretary of State John Kerry heads to Geneva on Thursday for a high-stakes meeting with his Russian counterpart that could conceivably tip the balance on whether the United States strikes Syria militarily over alleged chemical weapons use. – Jamie Crawford

Leading Drudge: Curveball: Woman Behind Case For Syria Strike Fired For Lying
The Syria researcher whose Wall Street Journal op-piece was cited by Secretary of State John Kerry and Sen. John McCain during congressional hearings about the use of force has been fired from the Institute for the Study of War for lying about having a Ph.D., the group announced on Wednesday. – Mackenzie Weinger for Politico

Leading HuffPo: Pure Panic: Trader Joe's Makes Eyebrow-Raising Obamacare Move
After extending health care coverage to many of its part-time employees for years, Trader Joe's has told workers who log fewer than 30 hours a week that they will need to find insurance on the Obamacare exchanges next year, according to a confidential memo from the grocer's chief executive. – Dave Jamieson

Leading Politico: In Alaska, fears of a GOP Senate civil war
The GOP civil war may be coming to Alaska — and with it possibly the clearest test of whether the party can unite to win the Senate in 2014 or repeat the kind of bloodletting that proved so costly the past two elections. – James Hohmann

Leading The New York Times: Planned as Call to Act, Obama’s Speech Became a Plea for Time
Among members of Congress and in world capitals, President Obama’s speech on Syria offered some relief about a possible diplomatic solution, but few reassurances. – Michael D. Shear

- Trust issues -
PRESS SECRETARY JAY CARNEY AT THE WHITE HOUSE BRIEFING: “It is simply the case that Russia has not been constructive or helpful on this matter for the last two years, but there is an opportunity here, and they have laid it out pretty specifically. … It is absolutely the right thing to do and the responsible thing to do to explore this potential avenue.”
SPOKESWOMAN JEN PSAKI AT THE STATE DEPARTMENT BRIEFING: “We are going into this eyes wide open. And the secretary when he spoke with the foreign minister just two days ago made clear we are not going to play games here.”

- Democrats embrace Russia plan, off hook on military action vote -
DEMOCRATIC REP. BRAD SHERMAN OF CALIFORNIA AT A PRESS CONFERENCE ON CAPITOL HILL: "What the Russians have proposed may turn out to be the best thing to come out of Russia since vodka. It, it's, an imperfect implementation of the Russian proposal is far better than a perfect implementation of an airstrike campaign."
DEMOCRATIC REP. CHRIS VAN HOLLEN OF MARYLAND AT A PRESS CONFERENCE ON CAPITOL HILL: "What we're doing is putting forward a revised resolution that could be taken up in the House in the Congress if and when the president determines that it would be necessary to proceed with that kind of legislation. So we agree that we should take a pause."

- Obama's Syria speech breeds Benghazi discontent -
REPUBLICAN REP. TED POE OF TEXAS IN A SPEECH ON THE HOUSE FLOOR: "The president is concerned about Syrians. Syrians being killed by Syrians. I wish he was just as concerned about Americans being murdered by terrorists in Benghazi, Libya."

- Clearing up Syria discussion on Comedy Central -
STEPHEN COLBERT ON HIS LATE NIGHT COMEDY SHOW: "Tonight, we are stepping away from the conflict in Syria, because apparently that was the United States. A lot of details still to be worked out and we will get into those tomorrow, but the upshot is that America will not attack Syria for gassing its citizens if they give up their chemicals weapons. … It is like if you decapitated a co-worker, so they are taking away your ax but you get to keep your job and your hatchet."

Alex Burns (@aburnspolitico)
"And that was the last anyone ever heard of Anthony Weiner."

Josh Harkinson (@JoshHarkinson)
The latest income inequality figures came out and–surprise!–the rich are still pulling away from the rest of us: http://www.technologyreview.com/news/519171/nsa-leak-leaves-crypto-math-intact-but-highlights-known-workarounds/

Ron Lieber (@ronlieber)
In court, Abercrombie & Fitch argued that if a store employee wore a hijab it would negatively affect sales. http://abcn.ws/16kp2Oc

Clinton Yates (@clintonyates)
It's worth noting that the @NYTimes final edition front page has zero stories about the 9/11 attacks today. (h/t @peterogburn)

Crossfire (@CrossfireCNN)
WH @PressSec Jay Carney to @edhenryTV: We can debate on Crossfire one day... @JimAcostaCNN: We can arrange that http://on.cnn.com/15kuL6O

The sadness, despair and anger the United States felt after the terrorist attacks of September 11, 2011 was unimaginable. But what was heartening was the outpouring of support from countries around the world.

One such country was Canada – who organized “Operation Yellow Ribbon” in response to the terrorist attack.

The humanitarian effort aimed at accommodating the tens of thousands of air passengers who were unable to reach their final destination because all air traffic in the United States was shut down following the attack.

A total of 239 international flights were diverted to Canada in the day following September 11 and the government of Canada hosted thousands of stranded passengers in gymnasiums, schools and hotels.

On airport, Gander International Airport in Newfoundland, hosted a total of 38 flights, including 6,122 passengers and 473 crew. At the time, the total population of Gander was 10,000 people.

The generosity of the Canadian people and government were heralded after “Operation Yellow Ribbon.”