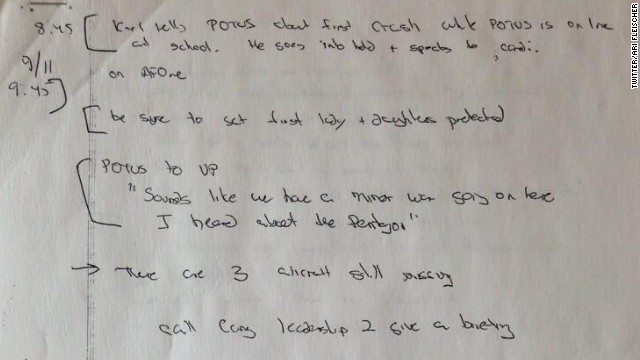 Washington (CNN) – Ari Fleischer knows exactly where he was the morning of Sept. 11, 2001.

The press secretary of former President George W. Bush gave the rest of us a glimpse on Twitter Wednesday, tweeting a page of his handwritten notes detailing the minutes of that morning.

"Here's a copy of one page from my 9/11 notes," the tweet reads. Fleischer read out portions of the notes to reporters in the days following the attacks.

In a tweet a few minutes later, Fleischer, now a CNN contributor, shows a photo of himself from 12 years ago, notebook in hand.

"I took notes throughout the day as the President and Andy Card worked the phones," Flesicher says in the tweet. Andrew Card was Bush's chief of staff at the time.

The page offers just a two-hour glimpse into the day, from the first notification of the attack to 10:20 a.m., when Fleischer notes that Bush had scrambled fighters and escorted a plane near Washington to land. "Authorized to shoot down," Fleischer writes.

Witness to history: White House photographer and the images of 9/11

Here's a copy of one page from my 9/11 notes. pic.twitter.com/juDmalWMod