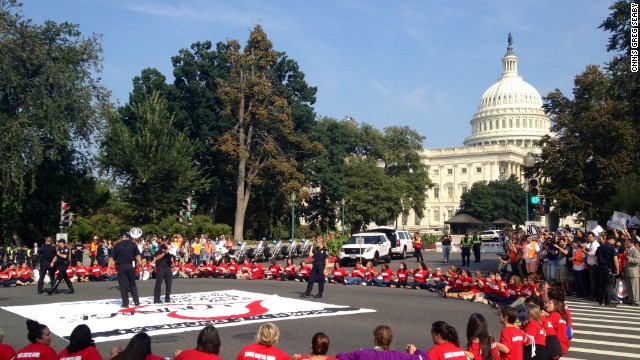 Immigration protest outside Capitol leads to over 100 arrests

Washington (CNN) – Over 100 people were arrested Thursday morning as a group of undocumented women participated in an act of "civil disobedience" outside Congress, protesting what they call the House of Representatives' inaction on immigration reform.

A large group of the women, some of whom they say are undocumented, formed a sitting circle in the middle of the intersection in front of the Capitol building.

Lieutenant Kim Schneider of the U.S. Capitol Police confirmed that over 100 people were arrested at 10:30 a.m., charged with Crowding, Obstructing, or Incommoding under DC Code 22-1307. Event spokesperson Maria Bianchi, who is with the public relations firm BerlinRosen hired to coordinate the rally, said 25 undocumented immigrants were among those arrested.

According to a release from one of the groups participating, the women knew they were risking arrest in the protest. They are trying to call attention to "the House's inaction on comprehensive and inclusive immigration reform that treats all immigrants - especially women and children – fairly," according to a release from GetEQUAL, a social justice group that advocates for full equality for LGBT Americans.

Hundreds more were expected to take part in the protest but not the civil disobedience, the release said, watching from the sidewalk. The goal, to "speak out about how women disproportionately bear the burden of the failed system, despite their considerable contributions to the well-being of their families, communities and the country."

GetEQUAL co-director Heather Cronk was planning on participating. Fellow co-director Felipe Sousa-Rodriguez is himself an undocumented immigrant and immigration reform advocate, according to the release.

–CNN's Lisa Desjardins and Greg Seaby contributed to this report