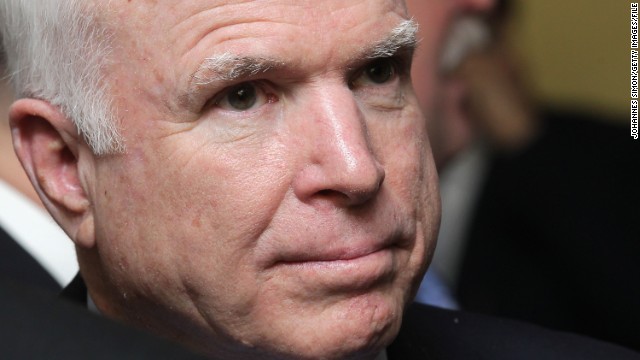 McCain says he's 'probably' in last term, or not

(CNN) - Sen. John McCain on Friday sought to clarify some comments he made about his political future.

"I've long said I'll wait a few yrs before thinking about whether to seek reelection in 2016. Focused on our present challenges," McCain tweeted.

While being interviewed Thursday by The Wrap at a launch party for his daughter's new television show, the Arizona Republican was interrupted by supporters of President Barack Obama who thanked McCain for siding with the president "for once in your life."

McCain, 77, has been a key Senate player this year in working with the White House on issues pushed by President Obama, including immigration, gun control and Syria.

According to The Wrap, McCain responded to the individuals, saying: "The president and I, he's in his last term, I'm probably in mine, the relationship we have had over the past three years is quite good. Quite good."

A reporter for The Wrap followed up with McCain, asking if this was really his last term.

"Nah, I don't know," McCain replied. "I was trying to make a point. I have to decide in about two years so I don't have to make a decision. I don't want to be one of these old guys that should've shoved off."

Re-elected to a fifth term in 2010, the senator has a while until he has to decide whether or not he'll pursue a re-election bid. He'll be 80 years old by November 2016.

In February, McCain told the Arizona Republic he has not decided whether to run, but he joked that he expects "people inquiring daily as to my health" as he get further into his current term.

His political openness towards the White House–though he's still never afraid to offer criticism when he feels it's due–has fueled speculation that he's not as worried about winning another term.

He also donated $9 million in surplus campaign funds to help Arizona State University launch the McCain Institute for International Leadership. He said at the time he could always raise more money for another campaign down the road, according to the Arizona Republic.