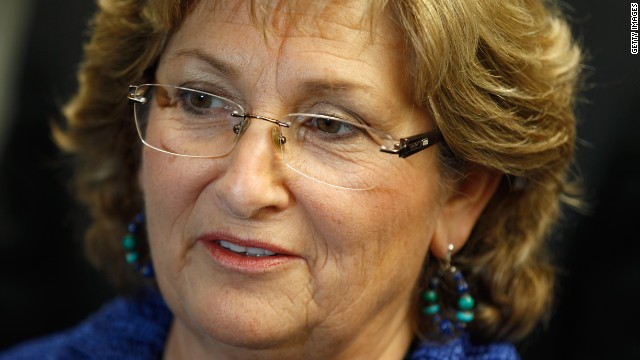 Rep. Diane Black, R-Tennessee, highlighted her bill, "No Subsidies Without Verification Act," which was passed by the House this week, -one of dozens of attempts by the GOP-controlled House to chisel away at the health care law.

The bill, however, has little chance of going anywhere in the Democratic-controlled Senate.

"This legislation stops the government from issuing health care subsidies until it has a system in place to prevent fraud. It's that simple," said Black, a registered nurse for 40 years.

What is she referring to?

Obamacare subsidies are essentially tax credits that help free up money for individuals to purchase health insurance. The lower a person's salary, the higher their subsidy will be.

Opponents of the health care law are frustrated by a rule change announced by the administration this summer. The new rule says that state insurance exchanges can relax how they verify the income of people who apply for the subsidies.

As CNNMoney's Jeanne Sahadi explains it, exchanges must still check the applicant's income against a federal database, which will include information from his or her federal tax returns and a record of Social Security benefits.

The exchanges will be looking for disparities between what the applicant says and what's in the database.

If it looks like someone is understating his or her income by more than 10%, and the exchange doesn't have other sources to quickly check against, the exchange may choose to rely on what the applicant says.

To prevent fraud, the IRS will check the person's actual income when he or she files their tax return that next April. Anyone who might get a bigger subsidy than they're eligible for will have to pay back the difference to the IRS.

But Black argued the Obama administration is relying on "the honor system" rather than a true verification system.

"You heard that right: instead of exercising common sense and accountability, the administration is willing to just give away your tax dollars – no questions asked," she said.

Read her full comments below:

Hi, I'm Diane Black, and I represent Tennessee's Sixth Congressional District in the U.S. House of Representatives. What an honor it is to be speaking with you.

Protecting taxpayer dollars is one of Washington's most important responsibilities. Your money should be spent wisely or not at all. And everything we do to stop waste and fix broken government removes obstacles to creating jobs and building a stronger economy.

This week, the House took on a hot spot for fraud and abuse in the president's health care law by passing a bill I authored called the No Subsidies Without Verification Act. This legislation stops the government from issuing health care subsidies until it has a system in place to prevent fraud. It's that simple.

Now, you'd be right to ask, why isn't this the case already? Well, in an attempt to prop up its struggling health care law, the Obama administration decided they'd hand out subsidies without verifying who's eligible. They just want to rely on the honor system. You heard that right: instead of exercising common sense and accountability, the administration is willing to just give away your tax dollars – no questions asked.

Not only is that unfair to hardworking taxpayers like you, it opens the door a mile wide to fraud and abuse. According to one independent estimate, some $250 billion in bad payments could be doled out over the next decade.

This is nonsense. And members of both parties agree. Democrats on the powerful Senate Appropriations Committee have also come out for requiring verification. Now we need the full Democratic-led Senate to act.

This is just the latest in a string of bipartisan efforts to repeal and protect Americans from the president's health care law. The House has also acted in bipartisan fashion to give individuals and families the same delay from the law's mandates that big businesses have received. The president himself has signed seven bills that dismantle parts of the law.

It's important work, and like many of you, this issue affects me personally. I've been a registered nurse for more than 40 years now, and I can tell you the things patients and their families count on – their doctors, their plans, the cost of their care – all of this comes under siege in the president's health care law. It won't just fail to keep its promises; it will make things much worse. You don't have to take my word for it: every day we're seeing new reports of higher costs, less access, and fewer jobs.

Together, we can stop this 'train wreck' and put the focus back on patient-centered solutions. Together, we can build a stronger economy that rewards hard work and people who do the right thing.

Again, it has been my honor to address you on behalf of my colleagues. Thank you for listening.