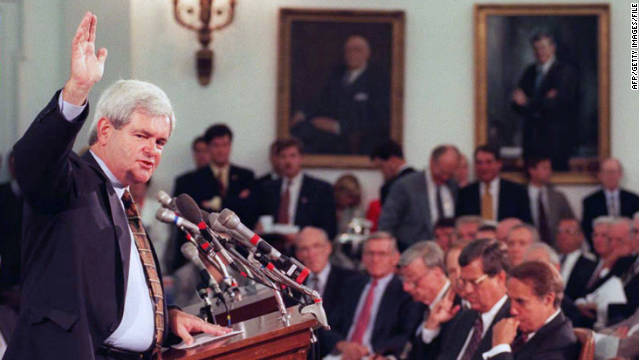 CROSSFIRE: Maryland Gov. Martin O’Malley and Texas Gov. Rick Perry face off at 6:30 p.m. ET in what we expect will be a highly charged debate between two potential 2016 presidential candidates. Earlier today, Perry visited Maryland in an effort to lure businesses to the Lone Star State. And just hours ago, O’Malley announced he is heading to New Hampshire in November. http://on.cnn.com/16mumNL

MARKET WATCH: Dow and S&P add about 1% to close at record highs after Fed announces it will continue stimulus.

TRAIL TRIVIA
(Answer below)
What nickname did Texas Gov. Rick Perry reportedly give his cowboy boots?

What came first: the partisanship or the government shutdown?

Not really a common question on Capitol Hill, but according the findings of a 2013 study from Duke University and the University of North Carolina-Chapel Hill, the answer could be clear: they could exist in a feedback loop.

The study found that the 1995 Congress was the most partisan in over 100 years and the kick-starter for the ideological divisiveness that is now the norm.

When then-President Bill Clinton and House Speaker Newt Gingrich couldn't agree on funding for Medicare, education and other expenditures, the federal government shut down twice when non-essential government workers were put on furlough. The debate over the shutdown was highly contentious, partisan and at times ugly.

Fast forward nearly 20 years: It is that culture of partisanship that is currently being blamed for the gridlock on Capitol Hill that has the White House and Congress currently walking towards another government shutdown.

In short, a shutdown beget partisanship and that same partisanship could beget another government shutdown in less than two weeks.

Partisanship "started changing in Clinton’s 1st term (1993-1994) and solidified in the 104th Congress (1995-1996), with polarization returning to hyper levels not seen in nearly 100 years," James Moody of Duke University and Peter Mucha of UNC wrote.

Since the shutdown, while the level of polarization has ebbed and flowed, it has remained more partisan than it ever was before the '95 shutdown.

"This level of polarization could be self-reinforcing," Moody and Mucha wrote. "Since success in middle positions requires coalitions and trust that are unlikely given so many party loyalists."

Leading Drudge: Mother: 'So, So Very Sorry'
The mother of the man who killed 12 people at the Washington Navy Yard says she is "so, so very sorry that this has happened." Cathleen Alexis said Wednesday in New York City that she does not know why her son, Aaron, did what he did and she will never be able to ask him. – From the AP

Leading Politico: Issa: I can call Hillary Clinton back
Rep. Darrell Issa says the House Oversight and Government Reform Committee can “certainly” call back former Secretary of State Hillary Clinton to testify on Benghazi. “We can certainly have Mrs. Clinton back; our view is that we need to get to the facts,” Issa (R-Calif.) told Fox News in a clip that aired Wednesday. – Lucy McCalmont

- Tea Party: Yay Boehner! -
JENNY BETH MARTIN, NATIONAL COORDINATOR OF TEA PARTY PATRIOTS, IN A WRITTEN STATEMENT: “We are encouraged that Speaker Boehner has agreed to a vote on a Continuing Resolution that funds the entire federal government through mid-December but completely defunds ObamaCare. Based on what we have seen so far, it accomplishes what Congressman Graves, Congressman Meadows, and other House Republicans who are standing up against ObamaCare have sought. It’s not enough for Speaker Boehner to agree to a vote on a CR. He must make sure this bill passes, march it over to the Senate and continue to fight for its passage.”

- Hagel vows to correct possible security issues -
SECRETARY OF DEFENSE CHUCK HAGEL AT A PRESS CONFERENCE WITH REPORTERS: "Where there are gaps we will close them. Where there are inadequacies we will address them. And where there are failures we will correct them. We owe the victims, their families and all our people nothing less."

- Fascinating testimony from the Army Chief of Staff on the future of war -
GEN. RAY ODIERNO, ARMY CHEIF OF STAFF, AT A HEARING ON CAPITOL HILL: "There are some who have suggested there will be no land wars in the future. While I wish that were true unfortunately there is little to convince me that we will not ask our soldiers to deploy again in the future. We have also learned from previous drawdowns that the full burden of an unprepared and hollow force will fall directly on the shoulders of our men and women in uniform. We have experienced this too many times in our nation’s history to repeat this egregious error again."

- Starbucks isn’t ‘pro- or anti-gun’ -
STARBUCKS CEO HOWARD SCHULTZ IN AN INTERVIEW WITH CNN: “We've seen advocates on both sides of this debate use Starbucks as a staging ground. Starbucks is not a policy maker. We're not pro- or anti-gun.”
http://money.cnn.com/2013/09/18/news/companies/starbucks-guns/index.html?hpt=hp_c4

Paul Steinhauser (@psteinhauserCNN)
New poll: It's all knotted up in Virginia..McAuliffe's margin is down to 3.. but Cuccinelli's unfavorables are rising http://on.cnn.com/18ycipE

Barney Keller (@barneykeller)
Thanks @andyrNYT and the rest of the @nytimes editorial page – this is a fundraising gift! http://mobile.nytimes.com/2013/09/18/opinion/the-money-behind-the-shutdown-crisis.html

Amanda Terkel (@aterkel)
There may be a couple dozen closeted atheists in Congress http://huff.to/1aKJ4lY

Mike O'Brien (@mpoindc)
Bernanke, questioned about a third term: "I prefer not to talk about my plans at this point."

The gun-toting, plain-spoken Texas Gov. Rick Perry is known for delivering funny and buzzy anecdotes about his life.

One example: During Perry's short-lived 2012 presidential campaign, stories about the governor shooting a coyote while on a run was a popular story to tell about the Republican hopeful.

So here is another: Perry, proud of his long Texas heritage, is known for wearing cowboy boots to most of his public appearances and speeches. He has even shown them off in interviews.

According to the Dallas Morning News, Perry has nicknamed his boots "Freedom" and "Liberty."