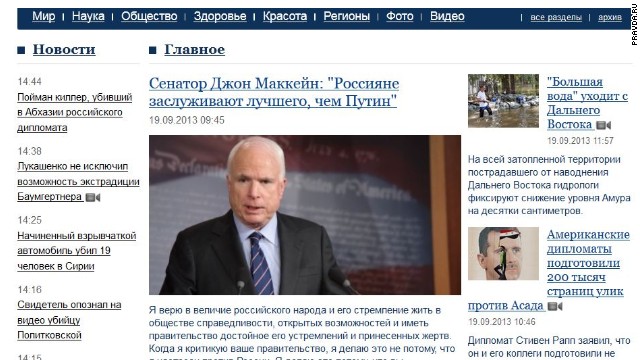 Watch: McCain will be on CNN's "The Lead with Jake Tapper" Thursday starting at 4 p.m. ET

“They punish dissent and imprison opponents. They rig your elections. They control your media,” the Arizona Republican said in his piece. (Read the full op-ed below.)

The piece by McCain comes one week after Vladimir Putin made headlines by publishing his own opinion piece, “A Plea for Caution from Russia” in the New York Times, on the eve of U.S. – Russia negotiations over Syrian chemical weapons.

Read: Op-ed for Op-ed: McCain to strike back in 'Pravda'

The senator, who does not support same-sex marriage in the U.S., also criticized Russia’s recently passed anti-gay legislation, saying Russian lawmakers “codify bigotry against people whose sexual orientation they condemn.”

A ban on the promotion of "gay propaganda" among minors became law in June, as Putin began his third term as president.

The article was published Thursday, after some initial confusion over which “Pravda” McCain would actually be writing for.

Read: Pravda vs. Pravda: Which one is McCain writing for?

The Pravda McCain had publicly said he wanted to be published in is one of the oldest Russian newspapers, founded in 1912.

Pravda, which means “the truth” in Russian, became the biggest newspaper during the Soviet period of Russian history. It was the official mouthpiece of the Central Committee of the Russian Communist Party. The newspaper was closed down after the collapse of the Soviet Union in 1991, then reopened in 1997 as the official paper of the Russian Communist Party. The current Pravda has a considerably smaller circulation compared to its Soviet glory days.

Pravda.ru, the news outlet that actually published McCain’s piece, is an electronic news website founded in 1999. Even though the website also bears the name Pravda, it is not connected to Pravda newspaper. The website has English and Russian editions and covers everything from politics to fashion and celebrities.

While editors at the communist Pravda publication said last week they were not going to accept an op-ed by McCain, a spokesman for the senator said McCain submitted one anyway, in addition to Pravda.ru, since there was confusion over the two different Pravdas. As expected, it was not published by the newspaper.

Putin said Thursday in a press conference he was not aware of McCain’s opinion piece about Russia.

In his piece, McCain also cited Putin’s support of Syrian President Bashar al-Assad as well as Russia’s recent actions in the United Nations as an example of failed foreign policies, saying, “He is not enhancing Russia's global reputation. He is destroying it.”

The senator has been a strong advocate for military action against Syria, especially in light of the August 21 chemical weapons attack, and has been highly critical of the renewed diplomatic efforts between Russia and the U.S. This week, he told the Council of Foreign Relations, “I wish I could see the recent agreement between Russia and the United States to rid the Assad regime of its chemical weapons as a major breakthrough. Unfortunately, I cannot.”

In the article, McCain focused his message on their day-to-day circumstances, arguing that Putin “has given you an economy that is based almost entirely on a few natural resources that will rise and fall with those commodities. Its riches will not last. And, while they do, they will be mostly in the possession of the corrupt and powerful few.”

Reiterating that his message was written out of concern and compassion for the Russian public, McCain held firm. “When I criticize your government, it is not because I am anti-Russian,” he said. “It is because I believe you deserve a government that believes in you and answers to you. And I long for the day when you have it.”

When Pravda.ru editor, Dmitry Sudakov, offered to publish my commentary, he referred to me as "an active anti-Russian politician for many years." I'm sure that isn't the first time Russians have heard me characterized as their antagonist. Since my purpose here is to dispel falsehoods used by Russia's rulers to perpetuate their power and excuse their corruption, let me begin with that untruth. I am not anti-Russian. I am pro-Russian, more pro-Russian than the regime that misrules you today.

I make that claim because I respect your dignity and your right to self-determination. I believe you should live according to the dictates of your conscience, not your government. I believe you deserve the opportunity to improve your lives in an economy that is built to last and benefits the many, not just the powerful few. You should be governed by a rule of law that is clear, consistently and impartially enforced and just. I make that claim because I believe the Russian people, no less than Americans, are endowed by our Creator with inalienable rights to life, liberty and the pursuit of happiness.

A Russian citizen could not publish a testament like the one I just offered. President Putin and his associates do not believe in these values. They don't respect your dignity or accept your authority over them. They punish dissent and imprison opponents. They rig your elections. They control your media. They harass, threaten, and banish organizations that defend your right to self-governance. To perpetuate their power they foster rampant corruption in your courts and your economy and terrorize and even assassinate journalists who try to expose their corruption.

They write laws to codify bigotry against people whose sexual orientation they condemn. They throw the members of a punk rock band in jail for the crime of being provocative and vulgar and for having the audacity to protest President Putin's rule.
Sergei Magnistky wasn't a human rights activist. He was an accountant at a Moscow law firm. He was an ordinary Russian who did an extraordinary thing. He exposed one of the largest state thefts of private assets in Russian history. He cared about the rule of law and believed no one should be above it. For his beliefs and his courage, he was held in Butyrka prison without trial, where he was beaten, became ill and died. After his death, he was given a show trial reminiscent of the Stalin-era and was, of course, found guilty. That wasn't only a crime against Sergei Magnitsky. It was a crime against the Russian people and your right to an honest government – a government worthy of Sergei Magnistky and of you.

President Putin claims his purpose is to restore Russia to greatness at home and among the nations of the world. But by what measure has he restored your greatness? He has given you an economy that is based almost entirely on a few natural resources that will rise and fall with those commodities. Its riches will not last. And, while they do, they will be mostly in the possession of the corrupt and powerful few. Capital is fleeing Russia, which – lacking rule of law and a broad-based economy – is considered too risky for investment and entrepreneurism. He has given you a political system that is sustained by corruption and repression and isn't strong enough to tolerate dissent.

How has he strengthened Russia's international stature? By allying Russia with some of the world's most offensive and threatening tyrannies. By supporting a Syrian regime that is murdering tens of thousands of its own people to remain in power and by blocking the United Nations from even condemning its atrocities. By refusing to consider the massacre of innocents, the plight of millions of refugees, the growing prospect of a conflagration that engulfs other countries in its flames an appropriate subject for the world's attention. He is not enhancing Russia's global reputation. He is destroying it. He has made her a friend to tyrants and an enemy to the oppressed, and untrusted by nations that seek to build a safer, more peaceful and prosperous world.

I do believe in you. I believe in your capacity for self-government and your desire for justice and opportunity. I believe in the greatness of the Russian people, who suffered enormously and fought bravely against terrible adversity to save your nation. I believe in your right to make a civilization worthy of your dreams and sacrifices. When I criticize your government, it is not because I am anti-Russian. It is because I believe you deserve a government that believes in you and answers to you. And, I long for the day when you have it.