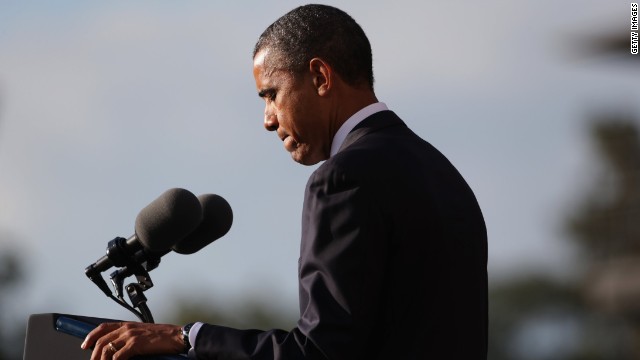 Read a transcript of his remarks:

"Secretary Hagel, Secretary Mabus, admirals Greenert and Hilarides, Mayor Gray, leaders from across this city, and armed forces, to all the outstanding first responders, and most of all, the families whose hearts have been broken, we cannot begin to comprehend your loss.

We know that no words we offer today are equal to the magnitude to the deaths of that loss. But we come together as a grateful nation to honor your loved ones, to grieve with you, and to offer as best we can some solace and some comfort.

Now on the night that we lost Martin Luther King Jr. to a gunman's bullet, Robert Kennedy stood before a stunned and angry crowd in Indianapolis, and he broke the terrible news.

And in the anguish of that moment, he turned to the words an ancient Greek poet, Aeschylus. "Even in our sleep, pain, which we cannot forget, falls drop by drop upon the heart until, in our own despair, against our will, comes wisdom through the awful grace of God."

Pain, which cannot forget, drop by drop, upon the heart. The tragedy and the pain that brings us here today is extraordinary. It is unique. The lives that were taken from us were unique. The memories their loved ones carried are unique. And they will carry them and endure long after the news cameras are gone.

But part of what wears on as well is the sense that this has happened before. Part of what wears on us, what troubles us so deeply as we gather here today is how this senseless violence that took place here in the Navy Yard echoes other recent tragedies. 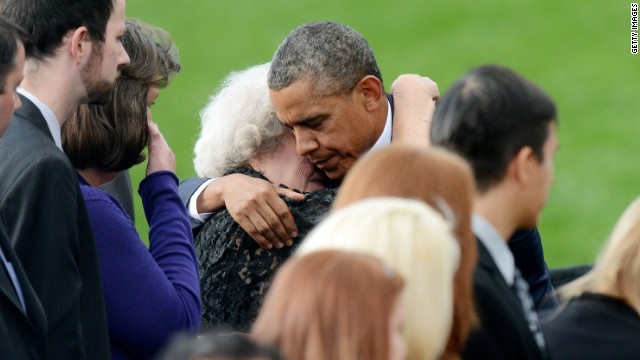 And these mass shootings occur against a backdrop of daily tragedies as an epidemic of gun violence tears apart communities across America, from the streets of Chicago to neighborhoods not far from here.

And so once again we remember our fellow Americans who were just going about their day, doing their jobs, doing what they loved. In this case, the unheralded work that keeps our country strong and our Navy the finest fleet in the world, these patriots doing their work that they were so proud of and who have now been taken away from us by unspeakable violence.

Once more we come together to mourn the lives of beauty, and the comfort, and the wonderful families who cherished them. Once more we pay tribute to all who rush toward the danger, who risk their lives so others might live, and who are in our prayers today, including Officer Scott Williams.

'I want them to know how she lived,' Jessica Gaarde said of her mother Kathy. 'She is not a number or some statistic.' None of these 12 fellow Americans are statistics. Today I want every American to see how these men and women lived. You may have never met them, but you know them. They're your neighbors. Like Arthur Daniels, out there on the weekend, polishing his White Crown Victoria.

Like Kenneth Proctor and his beloved mustang, who if you asked would fix your car, too.

She was the friendly face at the store. Sylvia Frasier, with her unforgettable gold hair, took a second job at Wal-Mart because she said she just loved working with people.

She was the diehard fan you sat next to at the game. Kathy Gaarde loved her hockey and her Caps. Season ticket holder for 25 years.

They were the volunteers who made your community better. Frank Kohler giving dictionaries to every third grader in his county. Marty Bodrog leading the children's bible study at church.

They lived the American dream. Like Vishnu Pandit, who left everything he knew in India for this opportunity and raised a wonderful family and dedicated himself to the United States Navy.

They were proud veterans like Gerald Read, who wore the Army uniform for more than 25 years. And Michael Arnold, who became one of the Navy's leading architects of whom a colleague said 'nobody knew those ships like him.'

They were dedicated fathers, like Mike Ridgell, coaching his daughters' softball teams. Joining Facebook just to keep up with his girls, one of whom said 'he was always the cool dad.'

They were loving mothers like Mary Francis Knight, devoted to her daughters and who had just recently with joy as her older daughter got married.

They were doting grandparents like John Johnson, always smiling, giving bear hugs to his 10 grandchildren and who would have welcomed his 11th grandchild this fall.

These are not statistics. They are the lives that have been taken from us. This is how far a single act of violence can ripple. A husband has lost his wife.

As has been mentioned for one family, the Daniels family, old wounds are ripped open again. Priscilla has lost Arthur, her husband of 30 years. Only a few years ago, as Mayor Gray indicated, another shooting took the life of their son, just 14 years old. 'I can't believe this is happening again,' Priscilla says. 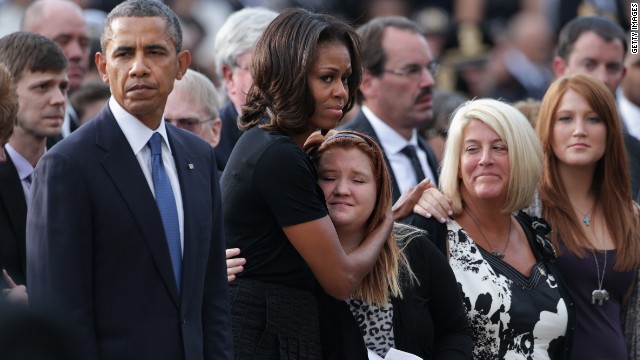 These families have endured a shattering tragedy. It ought to be a shock to all of us, as a nation and as a people. It ought to obsess us. It ought to lead to some sort of transformation. That's what happened in other countries when they experienced similar tragedies. In the United Kingdom, in Australia, when just a single mass shooting occurred in those countries, they understood there was nothing ordinary about this kind of carnage. They endured great heartbreak, but they also mobilized and they changed. And mass shootings became a great rarity.

And yet here in the United States, after the round-of-clock coverage on cable news, after the heartbreaking interviews with families, after all the speeches and all the punditry and all the commentary, nothing happens. Alongside the anguish of these American families, alongside the accumulated outrage so many of us feel, sometimes I fear there's a creeping resignation. That these tragedies are just somehow the way it is. That this is somehow the new normal.

No other advanced nation endures this kind of violence. None. Here in America, the murder rate three times what it is in other developed nations. The murder rate with guns is 10 times what it is with other developed nations. And there's nothing inevitable about it. It comes about because of decisions we make or fail to make, and it falls upon us to make it different.

Sometimes it takes an unexpected voice to break through, to help remind us what we need know to be true. We heard one of those voices last week: Dr. Janis Orlowski's team at MedStar Washington Hospital Center treated the wounded. And in the midst of one of her briefings, she spoke with heartbreaking honesty as somebody who sees daily and nightly, the awful carnage of so much violence. 'We are a great country,' she said. 'But there's something wrong. All these shootings, all these victims,' she said. 'This is not America. It is a challenge to all of us,' she said. 'And we have to work together to get rid of this.'

That's the wisdom we should be taking away from this tragedy and so many others. Not accepting these shootings as inevitable, but asking what can we do to prevent them from happening again and again and again. I've said before, we cannot stop every act of senseless violence. We cannot know every evil that lurks in troubled minds. But if we can prevent even one tragedy like this, save even one life, spare other families what these families are going through, surely we've got an obligation to try.

It's true that each of the tragedies I've mentioned is different, and in this case it's clear we need to do a better job of securing our military facilities, deciding who gets access to them. As commander in chief, I've ordered a review of procedures up and down the chain. And I know that Secretary Hagel is moving aggressively on that. As a society, it's clear we've got to do a better job of ensuring that those who need mental health care actually get it. And that in those efforts, we don't stigmatize those who need help. Those things are clear, and we've got to move to address them.

But we Americans are not inherently a more violent people than folks are in other countries. We're not inherently prone to mental health problems. The main difference that sets our nation apart, what makes us so susceptible to so many mass shootings is that we don't do enough, we don't take the basic common sense actions to keep guns out of the hands of criminals and dangerous people. What's different in America is it's easy to get your hands on a gun.

And a lot of us know this. But the politics are different, as we saw again this spring. And that's sometimes where the resignation comes from-the sense that our politics are frozen and that nothing will change.

Well, I cannot accept that. I do not accept that we cannot find a common sense way to preserve our traditions, including our basic Second Amendment freedoms and the rights of law abiding gun owners, while at the same time reducing the gun violence that unleashes so much mayhem on a regular basis.

By now, though, it should be clear that the change we need will not come from Washington, even when tragedy strikes Washington. Change will come the only way it has come and that's from the American people.

So the question now is not whether as Americans we care in moments of tragedy. Clearly, we care. Our hearts are broken again. We care so deeply about these families. The question is do we care enough, do we care enough to keep standing up for the country that we know is possible even though it's hard and even if it's politically uncomfortable?

Our tears are not enough. Our words and our prayers are not enough. If we really want to honor these 12 men and women, if we really want to be country where we can go to work and go to school and walk our streets free from senseless violence without so many lives being stolen by a bullet from a gun, then we're going to have to change. We're going to have to change.

On Monday morning, these 12 men and women woke up like they did every day. They left home and they headed off to work. General Read's wife Cathy said, "See you tonight for dinner." And John Johnson looked at his wife, Judy, and said what he always said whenever they parted. "Good-bye, beautiful. I love you so much."

Even in our sleep, pain which cannot forget falls drop-by-drop upon the heart, until in our own despair, against our will comes wisdom through the awful grace of God. What Robert Kennedy understood. What Dr. King understood, what all our great leaders have always understood is that wisdom does not come from tragedy alone or from some sense of resignation in the fallibility of man. Wisdom comes through the recognition that tragedies, such as this, are not inevitable. And that we possess the ability to act and to change and to spare others the pain that drops upon our hearts.

So in our grief, let us seek that grace. Let us find that wisdom. In doing so, let us truly honor these 12 American patriots. May God hold close the souls taken from us and grant them eternal peace. May he comfort and watch over these families, and may God grant us the strength and wisdom to keep safe our United States of America."