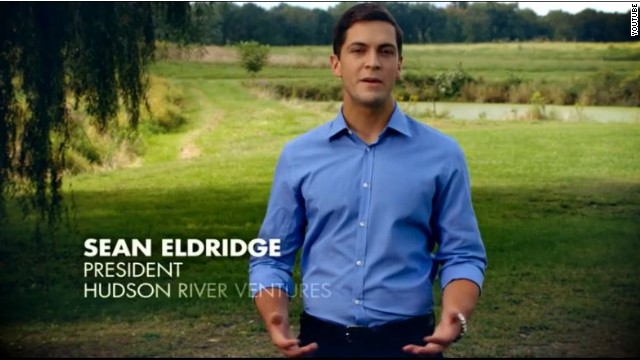 Sean Eldridge, 27, will run as a Democrat against Republican incumbent and 24-year Army veteran Chris Gibson in the Empire State's 19th Congressional District, located in the Upper Hudson Valley.

"Right now the voices of everyday New Yorkers are being drowned out by the special interests and party politics causing gridlock in Washington," Eldridge said in a statement Monday. "We need an independent voice who will stand up to Big Oil and Big Banks and fight for middle class families."

What Eldridge lacks in experience, the first-time candidate makes up for in ample fundraising connections. Eldridge is president of Hudson River Ventures, a small business investment fund. And he counts billionaire George Soros and Napster co-founder Sean Parker among his donors.

As of June 30, Eldridge had already raised closed to $748,000, nearly double the incumbent's $417,000, according to Federal Election Commission reports.

Eldridge has contributed $215,000 of his own money to the campaign, with the remainder mostly coming from individual contributions. Eldridge said he has pledged not to accept corporate PAC contributions to his campaign.

The bulk of Gibson's money comes from committee contributions, including some associated with corporations, with about 20% coming from individual contributions. The two-term congressman has not made any personal contributions to his own campaign.

Gibson's campaign said Eldridge's announcement "comes as no surprise." His team pointed to reports about Eldridge moving to the district specifically to run for Congress.

Eldridge and Hughes had moved to Garrison, 50 miles north of New York City, two years ago with eyes on exploring a congressional bid against then-Rep. Nan Hayworth. But they realized the seat would be too much of a challenge after Hayworth was defeated in 2012 by Democrat Sean Patrick Maloney, and bought another home farther north this year, according to The New York Times.

Gibson's team is also hitting Eldridge for his friends in high places.

"He's been raising money from wealthy friends while at the same time touting an economic plan that boils down to loaning his potential constituents money," Stephanie Valle, campaign spokeswoman for Gibson, said in a statement. "One thing is clear – this race will test the hypothesis of whether Congressional seats can be bought."