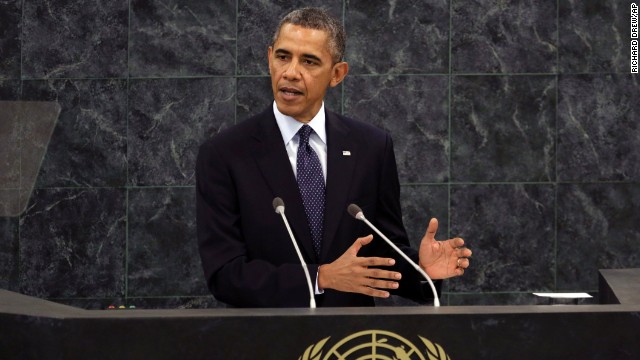 Preventing Iran from advancing its nuclear program – and possibly gaining a nuclear bomb – is one of the top priorities for Israel and for American-Jewish leaders.

During his address at the United Nations Tuesday Obama said the U.S. is encouraged that Rouhani received "a mandate to pursue a more moderate course" and was directing Secretary of State John Kerry to engage Iran alongside with several U.S. allies.

"There is broad support for Obama pursuing diplomacy that demands action from the Iranian side," David Halperin, executive director of the Israel Policy Forum, told CNN. "There is skepticism that Iran is prepared to take such action to end the nuclear program."

Several leaders in the American-Jewish community said they need to see some verifiable evidence in a change in Iranian posture before they truly believe there is a change in approach.

"Fine if the President wants to talk to Iran, but we would hope Iran would reciprocate," said Nancy Kaufman, CEO of the National Council of Jewish Women. "You have a very concerned Jewish community."

While Rouhani told CNN Chief International Correspondent Christiane Amanpour he has the authority to pursue talks with the U.S. regarding Iran's nuclear program, some Jewish activists told CNN they see Rouhani not making efforts to shake Obama's hand as very telling.

"The President was making an attempt to hand him an olive branch," Kaufman told CNN. The question now she asked is how committed are the Iranians to meaningful dialogue if they "rebuff the President at the UN."

Rabbi Julie Schonfeld, executive vice president of the Rabbinical Assembly, said "you have a new political leader that does not want to cast before his own people as soft on his relations with the U.S...it is hard to know what the unwillingness to shake hands means."

Several major Jewish groups weighed in with criticisms of Rouhani and his address at the United Nations but interestingly only briefly mentioned the president's remarks.

"Essentially ignoring the clear message in President Obama's U.N. address earlier in the day that 'conciliatory words will have to be matched by actions that are transparent and verifiable,' Rouhani's speech gave no hint that any meaningful actions will be forthcoming soon," said the Anti-Defamation League.

The White House sent an email to some leaders in the community with a link to a column by Bloomberg writer Jeffrey Goldberg highlighting Rouhani's handshake refusal. Some of the recipients saw it as the administration showing it is remaining skeptical of the Iranian outreach.

"They are wanting to see actions not just words," said one leader who requested anonymity in order to speak freely. A different leader did not draw the same conclusions and saw it more as part of general community outreach.

While the president's Iran remarks got a lot of media play, several of the leaders said they were focusing on the president's highlighting of the effort by the administration to help the Israelis and Palestinians to forge a peace agreement in his U.N. address. "It is quite significant," said Halperin.

Administration officials have extensive outreach efforts to the American-Jewish community, including briefings several weeks ago when the Congress was considering a resolution to support military intervention in Syria. Several leading Jewish groups came out in support of such action arguing if the resolution did not pass, U.S. credibility would be hurt specifically pointing to the U.S. posture regarding Iran.

U.S. Ambassador to the United Nations Samantha Power met with Kaufman, the American Jewish Committee, the Conference of Presidents of Major American Jewish Organizations, the Anti-Defamation League and other groups recently discussing the wide range of topics important to them, including the need for caution regarding Iran.

Vice President Joe Biden held an annual reception Tuesday evening for dozens of American-Jewish leaders at his residence. One participant told CNN it is always is a "significant and well-taken gesture" demonstrating how the vice president has a strong and long-lasting relationship with many of these activists. In his brief remarks he talked about how people have given their lives to help protect Israel and the Jewish people.

This year there was an added twist when guests were greeted by the sight in the backyard of a Sukkah – a structure in Judaism built to celebrate the autumn harvest. While the reception coincidentally occurred the same day as the president's United Nations address, those remarks were not a major focus of the evening although some attendees did generally discuss them, the attendee said.