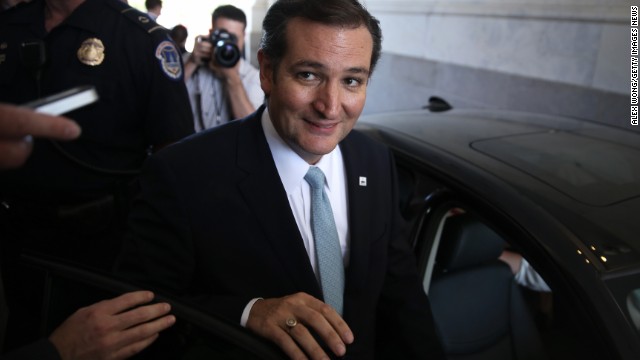 21 HOURS LATER : WITHOUT HAVING EVER LEFT THE SENATE FLOOR, TED CRUZ STOPS HIS “EPIC” OBAMACARE SPEECH… Republican Sen. Ted Cruz of Texas on Wednesday finally ended his oral assault on Obamacare – an all-night blend of political rhetoric and emotional pleas for all of his GOP colleagues to join him in blocking any government funding for the health care reforms. – Tom Cohen, Josh Levs and Alan Silverleib

SENATE MOVES AHEAD: The Senate voted unanimously to move ahead on a spending plan needed to avoid a government shutdown next week, with Sen. Ted Cruz, unexpectedly reversing himself and voting for the measure after previously trying to block it over their objection to spending for Obamacare.

HOW IT PLAYED AT HOME: The Houston Chronicle, Cruz's hometown paper, highlights "Cruz's voice loud on Obamacare" but also notes "Texas to have array of insurance options."

CASHING IN ON CRUZ: Conservative and tea party groups are trying to capitalize on Cruz’s marathon speech. Just before the Texas senator concluded his remarks, Tea Party Patriots blasted a fundraising email titled “Stand with Ted Cruz:” “Please, make the most generous emergency contribution you possibly can to Tea Party Patriots right away, and help us back up Senators Cruz and Lee with the grassroots muscle that will end Obamacare once and for all!,” the email reads. FreedomWorks, a conservative group that helped get Cruz elected, also created a Cruz website with a donate button. Meanwhile, the Democrats made sure to circulate the front page of The Courier-Journal of Louisville, Kentucky with the headline "SHUTDOWN IS LOOMING" next to a large cutout of Senate Minority Leader Mitch McConnell.

UP NEXT: DEBT CEILING CRUNCH NO LATER THAN OCT. 17… Treasury Secretary Jack Lew said Wednesday he now estimates he will have less cash on hand to pay the country's bills in mid-October than he previously thought. Instead of the $50 billion he estimated a few weeks ago, he now thinks the cash balance will be closer to $30 billion. – Jeanne Sahadi

TRAIL TRIVIA
(Answer below)
Who currently holds the Guinness World Record for the longest legislative speech ever?

Ted Cruz’s epically long filibuster certainly won him support from his base – but at what cost?

In her latest opinion column, CNN’s Chief Political Analyst Gloria Borger argues that Cruz’s speech is “about cementing a new definition of leadership: positioning yourself as the spokesman for your political base by telling it exactly what it wants to hear.”

“In Cruz’s case, it’s the Tea Party base. Lucky for him, there’s a made-for-TV bully pulpit, plenty of time to talk and the talking points are easy and oh so predictable,” Borger writes. “Cruz gets to cuddle the Tea Party while taking on the evil establishment—and by that he means the awful folks in his own party who would not shut down the government over a doomed move to kill Obamacare.”

But doing that, Borger writes, comes at a price for his relationships in Washington. Just take a look at these comments a senior House Republican who opposes Obamacare makes to Borger:

“We have been beaten up by his so-called grassroots movement back home. They pound us with ads, we hear about what he wants at town halls. We don’t like Obamacare, either. But there’s another way to go about this. He [Cruz] won one primary in a red state in a Republican year and now he’s busy running for president. … He’s all about raising money. And doing it at our expense.”

Gloria’s take: “That’s the crux of it all: Cruz doesn’t need a team. He’s got the floor to himself. And he’s got the people, right?”

The rest of Gloria’s column is worth a read: What the Ted Cruz spectacle is all about

Leading CNNPolitics: Work it out: Main Street fed up over Beltway shutdown battle
As the country spirals toward a possible government shutdown in less than a week, most Americans, according to polls, are frustrated by the partisan stubbornness and don't want that shutdown to happen. "Our country was founded on a great compromise," Casey Fos, a lawyer from New Orleans suburb of Covington, Louisiana, tells CNN. – Paul Steinhauser, Ben Brumfield and Allie Malloy

Leading Drudge: Reid Lowers The Boom
Sen. Ted Cruz, R-Texas, rose to speak on the Senate floor at 2:41 p.m. on Tuesday. He stood up in opposition to Obamacare, he said. And he said he would continue to speak until he could no longer stand. By Wednesday morning, Cruz and some of his colleagues were still standing. He was cut off by a new day of Senate business at noon by Senate Majority Leader Harry Reid. – Matt Berman, Matt Vasilogambros and Dustin Volz

Leading Politico: John Boozman thrashes Ted Cruz for Obamacare tactics
Sen. John Boozman lit into Sen. Ted Cruz during a closed-door meeting this week, underscoring the mounting tension within the Senate Republican Conference over the Texas freshman’s hardball tactics on Obamacare. Boozman is usually quiet and reserved in private sessions, but on Tuesday he could no longer keep his anger reserved, according to four people who witnessed the exchange. – Manu Raju

Leading The New York Times: Treasury Puts a Date on When Cash May Run Out: Oct. 17
Treasury Secretary Jacob J. Lew warned in a letter to Speaker John A. Boehner on Wednesday that the Treasury will only have $30 billion of cash on hand by mid-October, putting the United States on the precipice of an unprecedented default. – Annie Lowrey

- Iran's new president: Yes, the Holocaust happened -
IRANIAN PRESIDENT HASSAN ROUHANI IN AN INTERVIEW WITH CNN'S CHRISTIANE AMANPOUR: "Any crime that happens in history against humanity, including the crime the Nazis committed towards the Jews as well as non-Jews, was reprehensible and condemnable. Whatever criminality they committed against the Jews we condemn. The taking of human life is contemptible. It makes no difference whether that life is a Jewish life, Christian or Muslim."

- Bezos wants WaPo to experiment -
JEFF BEZOS, FOUNDER AND CEO OF AMAZON.COM IN AN INTERVIEW WITH CNN: “I thought the Washington Post is an important institution, and I’m optimistic about its future. It’s a personal investment. I’m hopeful that I can help from a distance in part by providing runway for them to do a series of experiments, in part through bringing some of the philosophy that we have used at Amazon to the Post.”

- Who would make a better president, Hillary or Chelsea? -
CNN’S PIERS MORGAN: “Who do you think might make the better president? Your wife or your daughter?”
FORMER PRESIDENT BILL CLINTON: “Day after tomorrow, my wife because she’s had more experience. Over the long run, Chelsea. She knows more than we do about everything. … I feel like I’m going to school every day when we have conversations.”

- Navy Yard shooter worked alone, video released by FBI -
VALERIE PARLAVE, FBI ASSISTANT DIRECTOR, AT A PRESS CONFERENCE IN WASHINGTON, D.C.: “There are indicators that Alexis was prepared to die during the attack and that he accepted death as the inevitable consequence of his actions. There is no indication today that Alexis was targeting specific individuals.”

Almanac Politics (@The_Almanac)
@tedcruz earned scholarship money in high school by entering speech contests. Though we can't say how many all-nighters he pulled back then.

McKay Coppins (@mckaycoppins)
Honest question: Why are people so uncontrollably offended by referring to Cruz's speech as a filibuster? So much passion for diction!

Erick Erickson (@EWErickson)
Those in my timeline saying @SenTedCruz's filibuster will do nothing really loved Abortion Barbie's filibuster that didn't stop TX.

Jonathan Martin (@jmartNYT)
Cruz holding the floor is obscuring some of the biggest news to come out of O'care/shutdown: McConnell&Cornyn breaking from hardliners

John Saeki (@JohnSaeki)
#infographic In 15 countries women are not allowed to get a job without their husband's permission @AFP http://twitpic.com/deuie7

Sarah Palin (@SarahPalinUSA)
Ted & Mike going strong for over 10hrs. We can hear you all the way in Wasilla. DC better be listening! #MakeDCListen pic.twitter.com/dZBhHVXR29

Rep. Steve Stockman (@SteveWorks4You)
Ted Cruz stayed up all night to fight ObamaCare. Obama went to bed while Ambassador Stevens was being murdered.

Republican Sen. Ted Cruz spoke for over 21 hours on the Senate floor – starting on Tuesday afternoon and ending around noon on Wednesday.

It was a long speech – no doubt – and an impressive performance.

But it wasn't close to the longest legislative speech ever given.

According to the Guinness World Record:

"The longest speech made was one by Chief Mangosuthu Buthelezi, the Zulu leader, when he gave an address to the KwaZulu legislative assembly between 12 and 29 Mar 1993. He spoke on 11 of the 18 days, averaging nearly 2½ hours on each of the 11 days."

Congrats to Greg Dean (@gregdean11) for correctly answering today’s Gut Check trivia question. Do we think he Googled it? Yes.