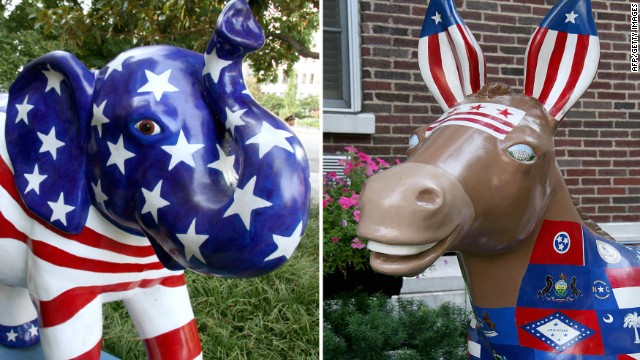 After the Democratic-controlled Senate voted on Tuesday for a fourth time to reject a measure passed by the Republican dominated House to dismantle the new health care law, Senate Majority Leader Harry Reid once again blamed the shutdown on the GOP.

"Government is closed because of the irrationality of what's going on on the other side of the Capitol. That's unfortunate but that's the way it is," Reid said.

"Democratic leaders in Congress finally have their prize. A government shutdown that no one seems to want but them," responded McConnell.

When it comes to the blame game over the shutdown, more Americans seemed to point fingers at congressional Republicans rather than President Barack Obama, according to three national polls conducted in recent days.

Forty-six percent of those questioned in a CNN/ORC International survey said they would blame Republicans on Capitol Hill for a government shutdown, with 36% saying the president would be more responsible and 13% pointing fingers at both.

In a separate question, 49% said that Obama was acting like a responsible adult in the budget battle, while 47% described him as a spoiled child. While that's nothing to brag about, it's better than Congress.

It's a similar story in an ABC News/Washington Post poll, where just over one in four said they approved of how congressional Republicans have handled budget negotiations.
That number edged up to 34% for Democrats in Congress, with 41% giving Obama a thumbs up on his handling of the fiscal fight.

More than seven in 10 questioned in a Quinnipiac University survey released Tuesday said they opposed Congress shutting down the government to block implementation of the Affordable Care Act, better known as Obamacare.

The respective party committees sought to use the shutdown to gain political advantage ahead of the 2014 midterm elections when Senate Democrats and House Republicans will defend their slim majorities.

The Democratic National Committee touted on Tuesday that it raised nearly $850,000 from more than 30,000 donors, including more than 6,500 who contributed for the first time.

"That's the best single day of fundraising we've had this cycle," said a DNC official, who added that "Democratic grassroots supporters are engaged, energized and ready to fight for the causes they're committed to."

The Democratic Congressional Campaign Committee, the re-election arm of the House Democrats, said on Tuesday they were going up with robocalls directed at what they consider 63 vulnerable House Republicans.

"While you were sleeping, Congressman Tim Walberg shut down the government," says one of the calls, aimed at the three-term representative from Michigan's 7th Congressional District. "But even worse – Congressman Walberg is still getting paid – and he's just not listening to our frustration."

Democrats need to pick up 17 GOP held House seats in the midterms to regain control of the chamber.

The National Republican Congressional Committee is pushing back, targeting 12 House Democrats who previously voted with Republicans for a one year delay in the health care law's individual mandate but then voted against it Monday.

"Patrick Murphy wants Florida families to believe he is fighting to stop Obamacare. But after last night's vote, it's clear that in Washington he sides with President Obama. Floridians have been begging Murphy to do what's right, but instead he chose to stand with Nancy Pelosi and voted against delaying the train wreck that is Obamacare," the NRCC said in a statement.

Murphy is a freshman from Florida's 18th Congressional District.

The National Republican Senatorial Committee fired off releases against five Democratic incumbents it considers vulnerable in 2014, and two House Democrats running for the Senate, accusing them of shutting down the government to "protect Obamacare."

The big question is whether any of this will make a difference come November 2014, when the entire House and one-third of the Senate are up for grabs.

The Quinnipiac poll indicates the Democrats with a 9-point lead in the 2014 generic ballot question, which asks if you would vote for the Democratic or Republican candidate in your congressional district.

But the battle for the House is a district-by-district fight, rather than a national battle, and just 17 of the 232 House Republicans are in districts won by Obama in last year's election.

The last shutdown came less than a year before the 1996 elections. While that shutdown, led by the GOP-led Congress, arguably helped President Bill Clinton in his re-election, it seemed to have had little impact on congressional elections that year. Democrats only picked up two House seats and lost two Senate seats.

"Polls seemed to indicate that the last shutdown did not have a permanent effect on opinions about President Bill Clinton or the Republican leaders at that time," said CNN Polling Director Keating Holland.

"It is possible that Americans forgot about the shutdown with the passage of time, or whether voters found the dynamics of the 1996 presidential election more compelling than the events of the previous year."