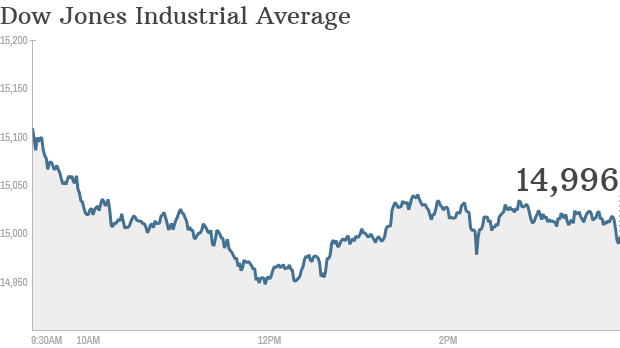 FOR LATEST NEWS: Follow the developments on CNN’s live blog.

THE LATEST WAY OUT? GOP MODERATES HUDDLE AS CONSERVATIVES SET AGENDA… A small but growing group of House Republicans is increasingly worried about the fallout from the government shutdown and say it's time for Speaker John Boehner to allow a simple vote on a spending bill. Defunding Obamacare can wait for now, they say. – Deirdre Walsh

SOCIAL WATCH: The government shutdown is causing buzz on Facebook, just this week more that 17 million people have talked about the government shutdown on the social networking site. On average, men are engaging about the topic approximately 37% more than women. The top areas of America buzzing about it are: 1. Washington, D.C. 2. Virginia, 3. Maryland, 4. West Virginia, 5. Alaska.

MARKET WATCH: Twitter pulled back the curtain on its $1 billion initial public offering on Thursday, revealing that the social network is still unprofitable.

TRAIL TRIVIA
(Answer below)
How much per day did the first members of Congress get paid?

“Stocks drop sharply on more Washington worries” – A headline that is not only attention grabbing, but worrisome as the shutdown of the federal government is starting to hit the bank accounts of more and more people.
“A sell-off in stocks accelerated Thursday, with the major indexes declining about 1% as Washington remains paralyzed and the nation approaches the deadline for raising the U.S. debt ceiling."

Our friends at CNN Money continued: “The Dow briefly slid below 15,000, a psychologically important level, for the first time in almost a month before recovering from the worst of its losses. The Nasdaq and S&P 500 also declined sharply.”

"I think probably at the beginning of the week people didn't think it would take so long to sort out," David Jones, chief market strategist at IG Markets in London, told CNN Money. "The fact that it's dragged on is making people a little bit nervous."

For those who don’t think the government shutdown affects every American – here is your Gut Check.

Leading Drudge: Sign Up: 1-800-Fuckyo
Need health insurance? The Obama administration has you covered. Simply dial 1-800-FUCKYO to reach the next available health-care provider. Far from being a mistype, that’s the official number that Health and Human Services wants Americans to dial when seeking health care. Obamacare’s national call center really did list its number as 1-800-318-2596, helpfully spelling out President Barack Obama’s tendency to blatantly flip the bird in plain view. – Katie McHugh

Leading HuffPo: Boehner Blinks
With a budget deal still elusive and a deadline approaching on raising the debt ceiling, Speaker John A. Boehner has told colleagues that he is determined to prevent a federal default and is willing to pass a measure through a combination of Republican and Democratic votes, according to one House Republican. – Ashley Park and Annie Lowrey

Leading Politico: Why many Republicans have no reason to deal
The vast majority of GOP lawmakers are safely ensconced in districts that, based on the voter rolls, would never think of electing a Democrat. Their bigger worry is that someone even more conservative than they are — bankrolled by a cadre of uncompromising conservative groups — might challenge them in a primary. – Alex Isenstadt

Leading The New York Times: ‘Reckless’ Shutdown Must End, Obama Says, Faulting G.O.P.
President Obama on Thursday said the only thing keeping the government at a halt was Speaker John A. Boehner’s refusal to allow a vote on a spending bill. – Jackie Calmes and Ashley Parker

- Obama: Give it a vote -
PRESIDENT BARACK OBAMA AT AN EVENT IN MARYLAND: “I want everybody to understand this. There are enough Republicans and Democrats in the House of Representatives today that if the speaker of the house, John Boehner, simply let the bill get on the floor for an up or down vote, every congressman could vote their conscience, the shutdown would end today.”

- Republicans: No -
HOUSE MAJORITY LEADER ERIC CANTOR AT A PRESS CONFERENCE ON CAPITOL HILL: “The speaker and I have both said that the Republican position is we believe we should fund this government but we also believe that there should not be any special treatment for anyone and that is why we believe the right solution to that is to provide for a delay of the individual mandate under the health care law.”
REPUBLICAN REP. STEVE KING OF IOWA IN AN INTERVIEW WITH CNN: “The American people reject Obamacare. The president is willing to put all of that on the line to save his namesake piece of legislation which I think will go down in history as the largest political tantrum ever.”

- A member of Congress explains why he is keeping his paycheck -
REPUBLICAN REP. TODD ROKITA OF INDIANA IN AN INTERVIEW WITH CNN: “We’ve produced no less than four different scenarios and plans that Harry Reid and the Senate Democrats along with the president have all rejected. So as long as I’m at my duty station – as long as I'm working, I’m going to keep my paycheck.”

Gut Check Full Service: CNN keeps count: Congress gets paid, but who's keeping their paycheck? As of Thursday at 2:00 p.m., the tally showed 32 senators are donating their salary to charity or the Treasury Department, while eight are not accepting a paycheck and two are undecided. In the House, 46 representatives say they're donating to charity or the Treasury, while 59 are not accepting a paycheck and one is undecided. – Dan Merica, Laura Koran and Ashley Killough

- A furloughed workers concern -
ROBYN CONLEY, A FURLOUGHED FEDERAL WORKER, IN AN INTERVIEW WITH CNN: “It means uncertainty and that's a scary thought. I was taught I can have a piece of the pie if I lived right, law abiding, attended school, got an education and all of that is threatened with the government shutdown.”

Michael Crowley (@CrowleyTIME)
Heard DC tour bus driver apologize for Capitol shutdown, then console by saying there's lots else to do in DC. "When life hands you lemons…"

Jake Tapper (@jaketapper)
Analysis: This is the Obama-Cruz shutdown http://thelead.blogs.cnn.com/2013/10/02/analysis-this-is-the-obama-cruz-shutdown/ …

Doug Mills (@dougmillsnyt)
A Hill Staffer checks his phone as Capitol Hill police take aim on the grounds of the Capitol. #shooting pic.twitter.com/iQviYcuM84

Claire McCaskill (@clairecmc)
Shots fired outside the Capitol. We are in temporary lock down.

Lindsey Graham (@GrahamBlog)
The members of Team Graham, who are working during the government shutdown, are fine and accounted for.

Charles Rangel (@cbrangel)
Was at the Capitol when shooting happened but now am safely back at the office and OK. pic.twitter.com/w9KAZfUVi2

Yesterday, we asked you how much members of the the 113th Congress are paid per year. The answer: $174,00 for rank-and-file lawmakers.

But how much did members of the first Congress get paid?

According to the U.S. Senate historian, the first members of Congress were paid six dollars for each day they attended “a session.”

“As one of its first orders of business, the House of Representatives formed a committee to draft congressional pay legislation,” writes the historian. “The panel recommended six dollars for each day a member attended a session. But Representative James Madison, the Constitution’s principal architect, irritated his fellow House members by proposing that senators be paid more than representatives because they presumably had greater responsibilities under the Constitution. The House ignored Madison and accepted the six-dollar rate for both chambers.”

The Senate wasn’t happy about this recommendation. Instead of establishing cabinet departments, locating the permanent seat of government, and creating the Bill of Rights, the Senate held a heated debate on salaries.

In the end, the Senate saved face by passing legislation that said in six years senators would receive a dollar a day more than House members for one year.

“Six years later, senators did receive the extra dollar, but just for a two-week special session in which only the Senate was convened to consider a treaty,” the historian writes. “For the next 187 years, members of both houses received the same rate of pay.”