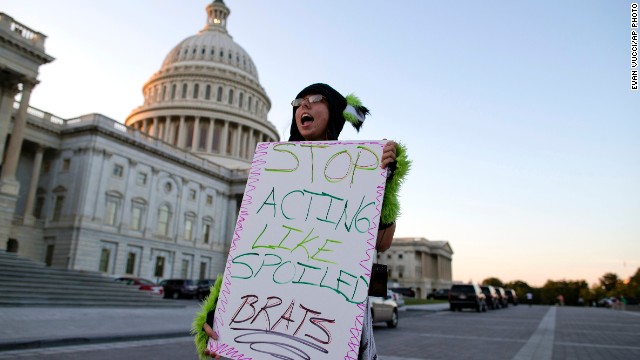 Washington (CNN) - More than seven out of 10 Americans disapprove of the government shutdown, and they say they're angrier than they've been about the way things are going in Washington.

The CBS News poll, which was conducted after the shutdown began and was released Thursday night, indicates 72% of Americans are not in favor of the shutdown that resulted from disagreements over the federal health care law.

As the country enters day four of the shutdown, no progress has been made in Congress to reach an agreement to restore funding to the federal government and bring back more than 800,000 furloughed employees.

The GOP-dominated House has been trying to push through a series of small bills to fund various entities of the government bit by bit. But Senate Democrats and the White House have made it abundantly clear they will accept nothing less than a proposal that funds the government all at once.

Nearly half of the country (43%) is "angry" with the way things are going in Washington, the highest in CBS News polling. Slightly more (44%) are simply "dissatisfied," while 8% are "satisfied" and 2% are "enthusiastic."

But who's to blame? The survey indicates both parties share blame, but 44% of Americans think Republicans are at fault, while 35% say Democrats and President Obama are responsible for the shutdown. Seventeen percent blame both.

That falls in line with a CNN/ORC International Poll released Monday that also shows Republicans will be blamed more than Democrats for the standoff.

The country is split on when they think the shutdown will end. Just over half (51%) say the standoff will be resolved in the near future, while 42% say it will "take a long time."

About one in five Americans (21%) say the priority for Congress should be to stop Obamacare from taking effect, while 73% say lawmakers' top job right now is to get the government running again.

Nearly half (47%) say they are personally affected by the shutdown and 50% say they're not affected.

CBS News interviewed 1,021 Americans by telephone from October 1-2. The poll's sampling error is plus or minus three percentage points.