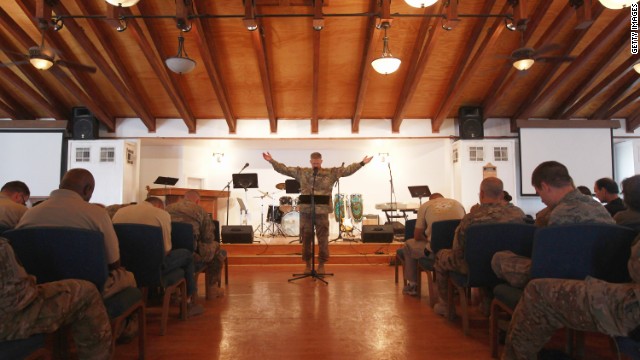 The measure was not a spending measure and only expressed that Congress did not want the Department of Defense to suspend religious programs during the shutdown for fear that it "threatens the ability of members of the armed services and their families to exercise their First Amendment rights to worship and participate in religious activities.”

Despite the fact that certain service members were working during the shutdown, the Defense Department decided to furlough civilian and contract workers because the department lacked an appropriations bill. This move included some religious leaders.

"At a time when the military is considering alternative sources of funding for sporting events at the service academies, no one seems to be looking for funding to ensure the free exercise rights of Catholics in uniform," John Schlageter, general counsel for the Archdiocese for the Military Services, USA, told CNN. "Why not?"

The Defense Department had allowed athletic teams from military service academies to play Saturday despite the shutdown because, they said, the game is paid for with non-appropriated funds.

This shortage of chaplains also appalled some lawmakers.

"There's no doubt the furloughing of people hired or contracted to perform the duties of military chaplains is having an effect," said Rep. Joe Wilson, R-South Carolina.

The resolution was sponsored by Republican Rep. Doug Collins of Georgia, who serves as a U.S. Air Force Reserve chaplain.

While heading to the floor to vote, some Democratic lawmakers were surprised the bill was being brought to the floor.

"I did not know Speaker Boehner was going to put it on the floor," said Rep. Steve Israel, D-New York.

House Republican Whip Kevin McCarthy said the bill should not have come as a surprise and was brought up today - along with a bill to pay all furloughed employees for their time away from the job - because tomorrow is Sunday.

"It was brought up because the attention just came up," McCarthy said as he raced to the floor. "They have a First Amendment right."

Shortly after the vote, Defense Secretary Chuck Hagel announced that most Department of Defense civilian employees "placed on emergency furlough during the government shutdown will be asked to return to work beginning next week.”

Hagel said his department, along with the Justice Department, concluded that the law does allow the Department of Defense to eliminate furloughs for employees whose responsibilities contribute to the morale, well-being, capabilities and readiness of service members.