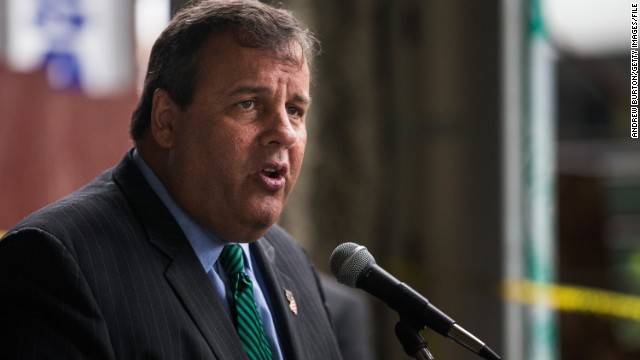 (CNN) - He may be a likely Republican contender for the White House in 2016 but Tuesday night, Gov. Chris Christie was all about New Jersey.

Debating Democratic challenger state Sen. Barbara Buono, Christie, the GOP governor of a state where Democrats greatly outnumber Republicans, presented himself as a middle of the road leader, repeating the phrase "in a bipartisan way" throughout the showdown.

Buono tried several times throughout the face-off at William Patterson University in Wayne, New Jersey to paint Christie as a stern conservative, throwing out labels like “tea party” and “trickle down economics” and tying Christie to the economic policies of former GOP presidential nominee Mitt Romney.

Christie is the overwhelming frontrunner in the race and his reelection bid has at times been seen as a test operation for a potential future presidential run. But when asked directly if he was running for president, Christie declined to make any headlines.

“I'm not going to declare,” Christie said, and “the people of New Jersey don't expect me to.”

If he does run, Christie said it wouldn't affect his responsibilities as governor. "I can walk and chew bubble gum at the same time," he said.

After Christie’s answer, Buono said it didn’t bother her whether or not Christie was running for president. It “bothers me how you're running for president,” she said. She attacked Christie’s veto of gun regulation and elimination of Planned Parenthood’s budget, all to kowtow to a national Republican audience in anticipation of a presidential bid, she charged.

Despite several attempts by Buono, the debate rarely veered into national issues, instead focusing largely on unemployment, education and job growth in the state.

When it did, Christie acted very much like the Republican governor of a blue state. On the Affordable Care Act, better known as Obamacare, Christie defended his decision to allow the federal government to set up the state’s healthcare exchange while declining to blast the law any more heavily than to say he disagreed with it.

Buono criticized Christie for allowing the state healthcare exchanges to be run by the federal government, accusing the governor of “appealing to that tea party element,” Buono said. She also tried to associate Christie with the partial government shutdown in Washington.

Buono also accused Christie of “trickle down” economics, particularly in his tax policies, favoring the wealthy over the poor and working class, which has been a “hallmark of his administration,” she said.

When the issue came to same-sex marriage, Christie continued to defend his belief that any change should come through public referendum, not through the state legislature or a Supreme Court ruling.

“It should be decided by the 8.8 million people in New Jersey,” rather than by politicians, Christie said.

Although Christie maintained that he believes “that the institution of marriage for 2000 years has been between a man and a woman,” he said, he added that he would support the legalization of same-sex marriage in the Garden State if it was passed in a referendum.

Buono attacked Christie for the stance, citing her daughter who is a lesbian. She urged Christie to have a "profile in courage" and stand up for the "human right" of same-sex marriage.

Even so, when asked what the candidates liked about one another, Christie praised Buono’s 20 years as a state legislator, saying that he would never denigrate her public service and wished more would dedicate their lives in such a manner.

To that Buono responded, “If he didn't denigrate my public service tonight I’d hate to be there when he does.”

Tuesday evening's showdown was the first of two debates leading up to the November 5 election. The one-hour face-off was broadcast on local television in New York City and Philadelphia. Combined, the two large TV markets blanket almost the entire state of New Jersey. The second debate is scheduled for October 15.