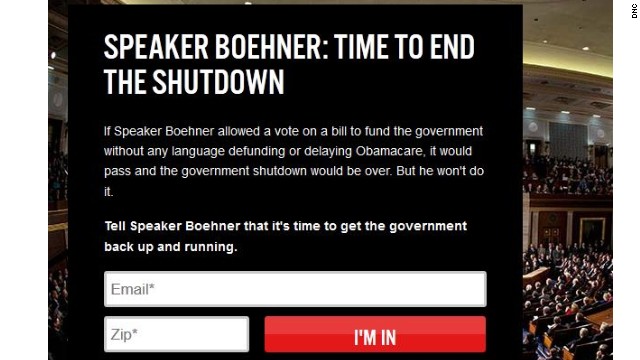 Washington (CNN) - The Democratic National Committee said Tuesday that it was launching a paid media campaign that targets Republican congressional leaders, blaming them for shutting down the federal government and risking a default on the nation's obligations.

"I'm calling from the DNC with a GOP Shutdown Alert. Congressman John Boehner was an architect of the GOP's government shutdown," starts the recorded telephone call to voters in Boehner's Ohio district.

The party committee also says it will run national ads on Facebook and Google to try and engage supporters around the country over the one week old partial shutdown of the federal government.

"We're holding Republicans accountable until they end this manufactured crisis, call a vote to fully fund the government through a clean continuing spending resolution, and allow the nation to pay its bills," Rep. Debbie Wasserman Schultz, the DNC chair, said in a statement.

The DNC's GOP counterpart pushed back against the paid media campaign.

"The DNC might want to remember the words of Senator Obama who voted against raising the debt ceiling in 2006 after saying that 'raising America's debt limit is a sign of leadership failure'. Since he took office the national debt has doubled. So instead of playing games, they should demand Senate Democrats allow a vote to open the government and cut spending to avert a debt crisis," Republican National Committee Communications Director Sean Spicer told CNN, in response to the DNC push.

Both political parties have been pointing fingers at each other over the shutdown and the lack of any deal to raise the nation's debt ceiling before an October 17 deadline. New national polling indicates that more people blame or are angry at Republicans than Democrats or President Obama, but the surveys suggest that all sides are taking a hit.