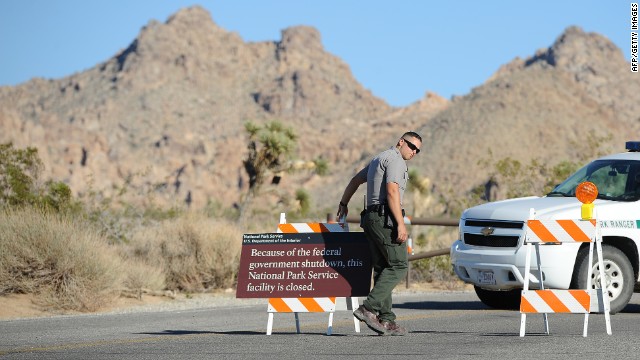 Washington (CNN) - Some national parks may reopen if the states in which they're located decide to put up the cash.

The Department of Interior announced Thursday it will consider working with governors who have offered to use state funds to open the parks.

"The Interior Department will begin conversations about how to proceed as expeditiously as current limited resources allow," Interior spokesman Blake Androff said in a statement.

As a result of the government shut down, all 401 national parks have been closed and 20,000 National Park Service employees have been furloughed.

States are feeling the pain, given that national parks serve as major tourist hubs that drive local economies.

Arizona Gov. Jan Brewer sent President Barack Obama a letter last week requesting that Washington make it possible for states to use their own funds or private contributions to reopen national parks. Her letter stated that in 2011, visitors to the Grand Canyon generated more than $467 million in revenue and supported nearly 7,400 jobs.

"We cannot afford to turn away this kind of revenue," Brewer wrote in the letter. "To do so will unnecessarily devastate the employment of thousands of Arizonans who depend on the Grand Canyon."

The state's two Republican senators, John McCain and Jeff Flake, issued a statement earlier Thursday, saying people who defy the law and visit the Grand Canyon are currently "being issued citations and ordered to appear before a federal court."

The Republican-led House has passed a series of bills to refund parts of the government, including the national parks. But the Democratic-controlled Senate demands the government be funded all at once.

The House Natural Resources Committee and the House Oversight and Government Reform Committee will hold a joint hearing next week, questioning the necessity of closing national parks and monuments during the shutdown.