Hillary Clinton: We need a conversation about intelligence tech and liberty

At a question-and-answer session at Chatham House Friday in London, Clinton said that “we need to have a sensible, adult conversation about what is necessary to be done” regarding surveillance technologies, “and how to do it in a way that is as transparent as it can be, with as much oversight and citizen understanding as can be.”
END_OF_DOCUMENT_TOKEN_TO_BE_REPLACED

Conservatives defiant in the face of GOP troubles

Washington (CNN) - They didn't get the memo.

Seven months after the national Republican Party issued a report exhorting the GOP to "stop talking to itself" and appeal to minorities and swing voters, conservatives banded together on Friday in a defiant show of unity against the party's political pragmatists. 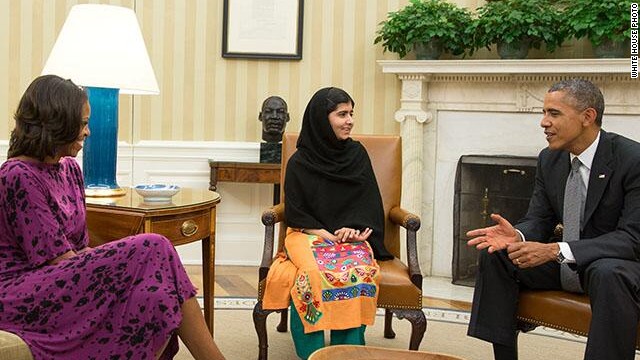 Malala Yousafzai, the 16-year-old shot by the Taliban for promoting girl's education in her native Pakistan, confronted Obama at the White House on Friday about U.S. drone strikes.
END_OF_DOCUMENT_TOKEN_TO_BE_REPLACED 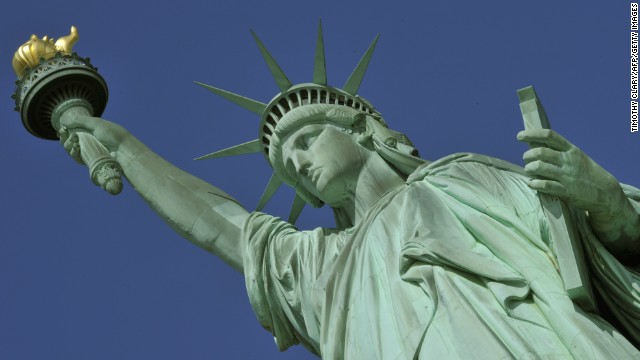 Statue of Liberty, Mount Rushmore and the Grand Canyon to reopen

(CNN) - The Statue of Liberty, Mount Rushmore and the Grand Canyon have found a way around the government shutdown for now and will reopen with the help of state funding.

New York Gov. Andrew Cuomo said on Friday that the state struck a deal with the National Park Service to fund Lady Liberty's operations for the time being.

(CNN) - While parts of the government remain closed and the debt limit deadline is less than a week away, negotiators appear a little bit closer Friday to working out a deal.

President Barack Obama and House Speaker John Boehner spoke by phone on Friday afternoon and agreed that all should “keep talking,” according to their spokesmen.

This as the White House expressed concerns with a proposal by House Republicans that would only address a debt-ceiling increase, saying Obama wants to do that and reopen the government.

Over in the Senate, CNN’s Dana Bash reports several impatient GOP senators are willing to give Boehner a day or two to come up with a deal with the White House on the shutdown and the debt ceiling. After that, they plan to push their own ideas more aggressively. They want longer-term solutions.

GOP sources told CNN's Deirdre Walsh that House Republicans have made an offer to President Barack Obama to resolve the budget standoff but the plan falls short of Obama's demand to immediately reopen the government. But the plan would temporarily raise the debt ceiling, the other key Democratic demand.
END_OF_DOCUMENT_TOKEN_TO_BE_REPLACED

Washington (CNN) - House Speaker John Boehner has a day or two max to strike a debt ceiling and government funding deal before some of his Republican Senate colleagues move more aggressively on their own ideas, several impatient GOP Senators have told CNN.

The Senators say they are willing to give Boehner a bit more time, about 24 to 48 hours, to come to an agreement with the White House to raise the debt ceiling and reopen the government.
END_OF_DOCUMENT_TOKEN_TO_BE_REPLACED

Former Montana Gov. Brian Schweitzer explains why he opposes settling for a six-week temporary deal on the debt ceiling.

Washington (CNN) - With a libertarian third-party candidate threatening to spoil his chances of winning the Virginia governorship, Republican nominee Ken Cuccinelli received a welcome endorsement Friday from the desk of Ron Paul.

Paul, the former Texas congressman and the guiding light of libertarians everywhere, endorsed Cuccinelli in a letter to the Virginia attorney general.
END_OF_DOCUMENT_TOKEN_TO_BE_REPLACED

However, Obama "has some concerns" with the latest House GOP proposal considered an opening gambit in the budget brinksmanship, White House spokesman Jay Carney told reporters.

CHRIS CHRISTIE: "If I was in the Senate right now, I'd kill myself," the Republican governor of New Jersey told the Philadelphia Inquirer's editorial board. The response came when Christie was asked what he would do if he was a member of the upper chamber during the current crisis. "This is why I've never had any interest in being in a legislative body."

NO DEAL: HOUSE REPUBLICANS DEBT OFFER falls short of the President's demand to immediately reopen the government. The GOP proposal would temporarily raise the debt ceiling, but it would not lift the shutdown right away. The House vote on a short term debt ceiling could come over the weekend.

SEPARATE THE ISSUES: Republican leaders are pushing to separate the two issues, allowing a vote to raise the debt limit while continuing talks with the White House over a government funding bill that would end the shutdown. This position is similar to what GOP leaders presented to the President Thursday. The aides declined to give specifics on what kinds of conditions GOP leaders were asking to be attached to that spending bill, but say an agreement to reopen the government could come within days.