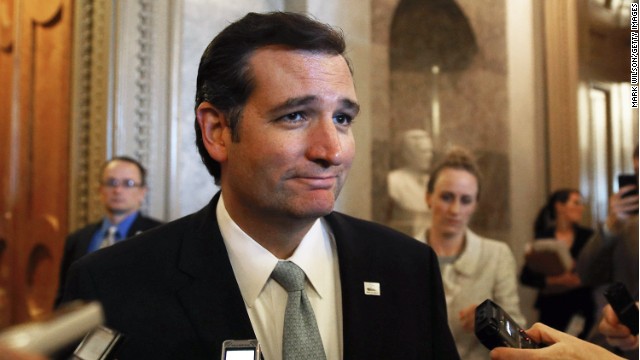 Washington (CNN) - Conservatives rallied Friday at an annual gathering in Washington, applauding the tea party-fueled standoff in Congress over the government shutdown and debt ceiling debate.

At the Values Voter Summit, sponsored by fiscal and social conservative groups, a number of the right's most high-profile lawmakers lined up to speak on the future of the conservative movement, as well as the stalemate on Capitol Hill.

The three-day event kicked off Friday morning, but CNN's Peter Hamby spoke to Family Research Council President Tony Perkins about what to expect at the event.

Check back here throughout the day to catch the latest on what the speakers say:

"Ted Cruz hand I have been roundly criticized for our actions in the attempt to defund Obamacare. We make no apologies. We stand with you. We stand with the people."

"If you do think about it, the very best argument against Obamacare is the president's conduct during the first 10 days of this shutdown. I mean look what's happened. The president is using the vast immense power of the federal government to hurt the American people. Why? In order to win a political argument! What happens then when we turn over some of the most private intimate decisions in our lives our health care system to the government? When will that be used as a tool against us? We must stop it. We must defund it. We cannot accept it."

"As values voters we have to remember that it is far more important to keep our eyes fixed on potential conservatives converts rather than on finding heretics. You see the principles that unite us are also the principles that help position us to win the hearts and the minds of votes across this great land."

"This afternoon President Obama has invited Senate Republicans to the White House. So after leaving here I am going to be going to the White House. I will make a request if I am never seen again please send a search and rescue team. I very much hope tomorrow morning I don’t wake up amidst the Syrian rebels."

"It is because of you that the House of Representatives has been standing strong because the House has been listening to the people."

"Senator Mike Lee and I began by pitching it in Washington and it was abundantly clear that this was not a strategy that Washington was going to embrace. It was far too risky and if there was one overarching urge in Washington, it is risk aversion. Do nothing, nothing, nothing that has any risk that it might actually do anything."

While Cruz received an enthusiastic reception from the crowd, he was interrupted multiple times by hecklers.

"I wish you would participate in the democratic process through speaking respectfully," he said to one heckler. "It seems that President Obama's paid political operatives are out in force today. And you know why? Because the men and women in this room scare the living daylights out of you."

Dogged by hecklers, Cruz hits back

Responding to another, he said: "I'm curious, is anybody left in the Organizing for America headquarters? I'm actually glad that the president's whole political staff is here instead of actually doing mischief in the country."

"At this point," he said to another heckler. "You know what's striking actually? In the course of this brief speech, we've heard more questions than President Obama's allowed in the past year."

"Let me make an offer to the president: I would welcome the president, if he wants to get a 100 of his most rabid political operatives in a room, I will answer their questions on television as long as he likes. And in exchange, all I would ask, Mr. President, is you take not a hundred but 10 men and women in this room and spend 30 minutes answering their questions for the American people."

“Today I want to talk about war media ignoring – from Boston to Zanzibar there’s a war on Christianity and they are being attacks but you don’t hear about it because it’s not convenient. The press gloss over attacks on Christians and describes it as sectarian but it’s being waged by fanatics of Islam.”

“Across the globe, Christians are under attack almost as if we lived in the Middle Ages or we lived under early pagan Roman rule. This administration does nothing to stop it and it can be argued that it is giving aid and comfort to those who tolerate these crimes.”

Paul: Obama 'does nothing to stop' war on Christianity

“We send billions of dollars to Egypt to Pakistan. We have helped place Islamic regimes in Afghanistan and Iraq. President Obama now sends arms to Islamic rebels in Syria. In Egypt, the mob that attacked our embassy climbed on top our embassy and burned out flag, I don’t know about you, but I have had enough. I say not one penny more to any country that would burn the American flag.”

"Maybe the American Dream may never be what it used to be, So we ask ourselves why is this happening and there's a lot of reasons. Globalization has changed the nature of our economy. You have all these jobs that have gone overseas because of cheaper labor costs. Millions of jobs have been replaced by machines...Too many people never got the education or the skills they need for the jobs that the new economy is creating. And big government is keeping our economy from creating new middle class jobs that people desperately need."

"By this point I had hoped someone would have heckled me, so that I could sip some water."

"I believe Jesus Christ is God," he said, pausing for a long round applause. "I believe he loves every single human being that has ever lived–no matter what they have done, even if they don't believe in him. That's why suffered a brutal death and he resurrected from the dead to erase the sins that separate us from him. I respect the rights of those who don't share my beliefs. But to teach my faith to my children and to share it with anyone who will listen, that is my right, too."

"We have to get back to fiscal sanity to save America. You see I think we have lost our way because we forgot the 'why.' Why are we here? I think there is good news though. I am a big beliver that even in the midst of a storm, the Word works."

"I have to tell you, you know, Obamacare is really, I think, the worst thing that has happened in this nation since slavery. And it is – in a way, it is slavery, in a way because – because it is making all of us subservient to the government. And it was never about health care. It was about control. And that’s why – that’s why when this administration took office it didn’t matter that the country was going off the cliff economically. All forces were directed toward getting this legislation passed."

"My colleagues and I are working to get a budget agreement. It's been slow going, but I want to make the most of this moment. We have an opportunity here to pay down the national debt and jump-start the economy. Divided government is frustrating. But our country is worth the effort. We have to make it work. Now, this President won't agree to everything we need to do. A budget agreement-with this President and this Senate-won't solve our problems. But I hope it's a start."

"This is a big fight. We're supposed to be ashamed this fight is about Obamacare, I'm not. I'm not ashamed. When Obamacare passed I was there that night. Grieving, weeping on the floor when Obamacare passed in the House or Representatives. I had made the first call to the American people. And I called you all to come into Washington, D.C. to look at the whites of the eyes of members of Congress and say to them 'not with my healthcare you don't.' 40,000 of you responded and came to Washington D.C. That created the rise of the tea party."