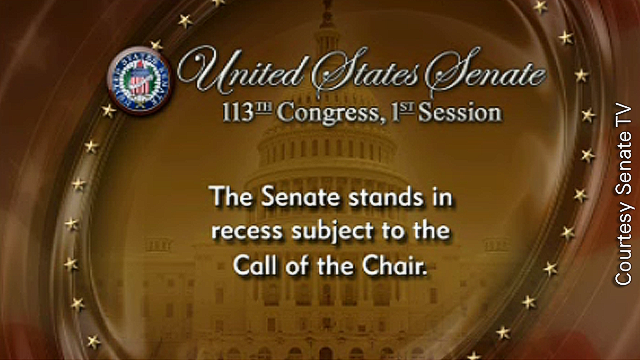 Congress cuts town despite no deal to end shutdown

Washington (CNN) - And on the twelfth day, Congress rested.

Despite the continuing government shutdown and the looming debt limit, many members of Congress headed out of town Saturday for the Columbus Day weekend.

[twitter-follow screen_name='politicalticker']
The House has adjourned until noon Monday, and while the Senate will convene tomorrow, members are not required to stay in town because no votes are scheduled.

Washington's Reagan National Airport was full of members from both parties fleeing the nation's capital for a couple of days in their home states and districts.

"It's gonna be a very quick trip," said Sen. Dan Coats, R-Indiana, as CNN caught up with him at the airport. "And it's very disappointing to be going home, having to turn right back around and come back, with no progress being made. I had hoped that we could resolve this thing."

Many said they were going home to see family for a day but could quickly return if there was a vote. In the House, there are no votes scheduled until Monday at 6:30 p.m.

"I'm going home for one day to see my children because there are no votes tomorrow, on Sunday. And that's the only day I'll have with them," Rep. Trent Franks, R-Arizona, told CNN before boarding his flight, adding that he could get back to Capitol Hill within a 12-hour notice of any votes.

The trips come after another deal fell through Saturday morning, with both sides blaming the other. On Friday, Republicans in the House proposed raising the debt ceiling for six weeks, but leadership informed the caucus that President Barack Obama rejected that proposal.

Collins, a Maine Republican, and a bipartisan group of Senators had called for a longer extension of the debt limit and government funding. Her proposal would have repealed the 2.3% tax on medical devices, which is used to help pay for Obamacare, and given federal agencies greater flexibility to deal with the forced spending cuts known as sequestration.

With many Senators and Representatives out of town, no major activity is expected in either chamber.

Leadership on both sides will remain in Washington and continue talks. Reid said he and Senate Minority Leader Mitch McConnell are involved in "cordial" and "preliminary" negotiations to reopen the government and extend the debt ceiling.

For the hundreds of thousands of furloughed workers, the shutdown is just starting to hit home as the first partial paychecks arrived Friday.

–CNN's Paul Courson and Dana Bash contributed to this report.