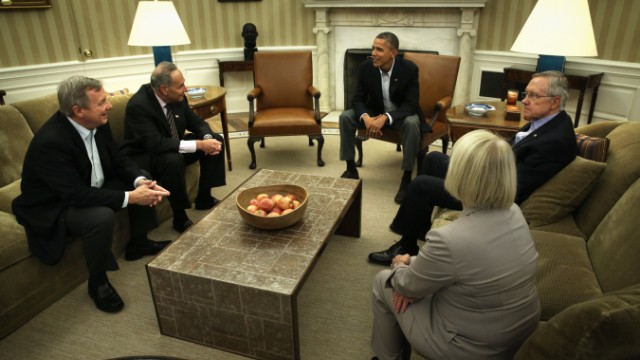 Senate Democrats 'sync up' at the White House

Washington (CNN) - Senate Democratic leaders emerged from a meeting with President Barack Obama Saturday evening saying they were more cohesive than ever.

Sens. Harry Reid of Nevada, Chuck Schumer of New York, Patty Murray of Washington and Dick Durbin of Illinois had a "very productive meeting" with the President, according to a Senate Democratic aide. Although they did not move forward on any particular deal or plan, they "reviewed a number of the options raised in meetings over the last few days."

[twitter-follow screen_name='politicalticker']
"Their conclusion was that while Democrats remain united, Republicans have yet to coalesce behind a clear negotiating position," said the aide. "Democrats' position remains the same: Democrats are willing to negotiate on anything Republicans want to discuss as soon as we reopen the government and pay our bills."

Another Democratic source called it an effort to "sync up" after so many different conversations over the last 72 hours and address what they say is a lack of a coherent Republican position.

The meeting, which began at 3:30 p.m. and lasted over an hour, came on a day of dashed hopes for a deal.

With the news, many members of Congress decided to travel home for the holiday weekend. The House is adjourned until noon Monday, and while the Senate will be in session tomorrow, members may leave town because there are no votes scheduled.

Still, leader on both sides are continuing to talk, with the White House's support.

"The President and the leaders agreed that talks between Senate Democratic and Senate Republican leaders should continue in the coming days."

Reid announced he and Senate Minority Leader Mitch McConnell, R-Kentucky, are engaging in "cordial" and "preliminary" negotiations to end the shutdown and raise the debt ceiling.

The hope is that McConnell, who knows how to deliver if he chooses to deliver, can "cut through the clutter," according to the Democratic source.