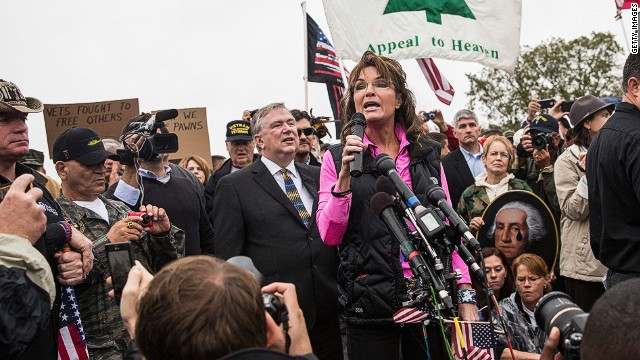 The backstory on the veterans rally in Washington

Washington (CNN) – Two groups were largely responsible for a hastily-arranged veterans rally Sunday on the National Mall, and one of them now accuses the other of "hijacking" the idea for the event and turning it into a political spectacle that grabbed the national spotlight.

Crowds of veterans and conservative activists overcame barriers at the World War II Memorial, where high-profile politicians used strong anti-Obama language and blasted the administration for closing national monuments and memorials during the partial government shutdown.

Some inflammatory rhetoric was heard from the podium and among the audience, and some protesters carried the grated barriers to Pennsylvania Avenue and dumped them in front of the White House.

So how did the rally come about? Here's the timeline.

On Sunday, October 6, one week before the rally, Larry Ward with the grassroots veterans organization Special Operations Speaks (SOS) came across a Facebook page promoting a "Million Vet March on the Memorials," for Sunday, October 13.

The event was being organized by a small, apolitical group called Brats for Veterans Advocacy. The group describes itself as "military brats, current and former military spouses and some veterans" that were sharply disappointed with veterans being used as "political pawns" in the ongoing government shutdown.

Ward, excited by the idea of the march, quickly approached one of the organizers from BVA and offered SOS's help in promoting the rally, Ward told CNN.

According to a series of emails, texts and other online communications released by SOS, a member of BVA responded and accepted the offer from SOS that same day. The member's name was redacted from the communications, and efforts by CNN to contact BVA and confirm the conversations have gone unsuccessful.

Once BVA accepted help from SOS on Sunday, Ward began drafting press releases, creating a website and making arrangements for the rally on Monday. He also recruited Rep. Steve Stockman, R-Texas, to appear at the event.

Later in the day, the BVA member expressed disagreement with some of the language drafted by SOS to promote the rally, including "tyranny" and "protest." Ward agreed to tweak it.

On Tuesday, the BVA member said other members in his group of about five people (located in four different time zones) started to review the promotional materials and didn't feel comfortable with the tone of the copy.

While the small group discussed it among themselves, Ward asked if he could promote the event to his own audience at SOS, without mentioning the connection to BVA. The BVA member said "Ok that's agreeable completely," according to the conversations.

Ward said that would also free him up to use "harder anti Obama messaging."

But over the course of Tuesday evening, things quickly unraveled.

The BVA member continued to relay his group's uncertainty about the direction the rally was taking, as the promotional material went public among conservative circles online. The group also didn't want politicians at the event.

"You're causing confusion with our cause," the BVA member told Ward, saying the promotional language was "divisive."

But Ward argued that the two had already agreed he could promote to his own audience, as long as he didn't mention BVA.

The BVA member quickly sent a cease and desist request from his group: "There are no agreements in place. There is no more wording that we can give to you. There will be no conversations over the phone either."

The BVA member said his group had simply envisioned thousands of veterans gathering on the Mall and singing the Star Spangled Banner. "No one storming a barricade," the BVA member told Ward.

Ward replied, saying in his experience, people don't congregate to sing. "The(y) assemble because they are outraged," he added. "Outrage-justifiable outrage will turn vets out."

The BVA member then notified Ward that BVA would be putting out language distancing itself from SOS.

Ward said he was simply trying to help and promote BVA's event, but after a few more disagreements, the two groups ultimately decided to split ways Tuesday night, resulting in two different websites for the same event.

On Wednesday night, days before the rally, BVA asked SOS not to use the name "'Million Vet March on the Memorials' name or likeness, nor to appear as an official sponsor, organizer or agent of our event in DC or elsewhere."

But Ward told them he wouldn't agree to that, saying "A rally is an assembly. A Rally is not intellectual property. SOS has the right to support this assembly of Veterans."

Far fewer than a million turned out for the rally, and widely-known speakers including Sens. Ted Cruz and Mike Lee, along with Sen. Sarah Palin were invited and gave speeches. One speaker made headlines for telling Obama to "put the Quran down...and to figuratively come out with his hands up."

Another person was seen holding a confederate flag when the protest moved to the White House, while others were holding signs calling for the President's impeachment.

Ward said the BVA member did not attend the event.

According to the National Park Service, anyone is allowed into the World War II Memorial as long as they're exercising their First Amendment rights

On Monday, one day after the rally, BVA put out a statement blasting SOS, though without naming it.

"The political agenda put forth by a local organizer in Washington D.C. yesterday was not in alignment with our message. We feel disheartened that some would seek to hijack the narrative for political gain," the statement read in part.

In an interview with CNN, Ward said there was no "hijacking" for "political gain." From the beginning, he argued, the rally was political because the government shutdown's effect on veterans is a "political issue."

"It wound up to be, in my opinion, one of the greatest acts of civil disobedience in American history," Ward said.