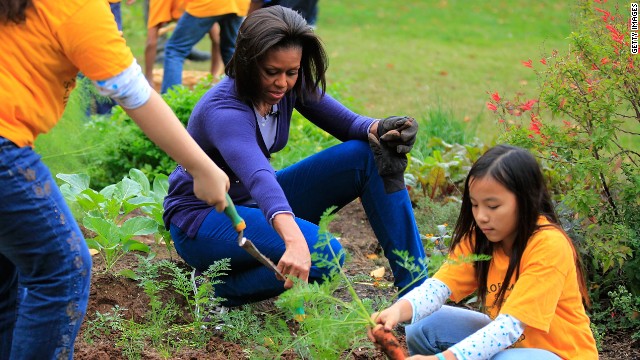 Regular maintenance has stopped on the garden and only periodic watering is being done, a White House official confirmed to CNN. That's consistent with landscaping being performed on all National Park Service areas crippled by the shutdown throughout the country.

The garden, which provides fresh fruit and vegetables to area food banks and helps feed visiting heads of state, has become overgrown. The once pristine 1,500 square-foot plot is now anything but, with ripe crops unpicked and rotting vegetables lying on the ground, according to Eddie Gehman Kohan, the founding editor of Obama Foodorama, a blog dedicated to covering the White House garden.

In the blog, Kohan has exhaustively covered the disarray that has befallen the garden for the last two weeks. Kohan writes that mushrooms are sprouting from the grass and fallen leaves that would ordinarily be raked away immediately are left scattered on the ground.

The warm fall weather has led to a lot of crop growth but the shutdown has left the White House without the staff to pick them, Kohan told CNN.

–CNN's Jim Acosta and Bryan Koenig contributed to this report.