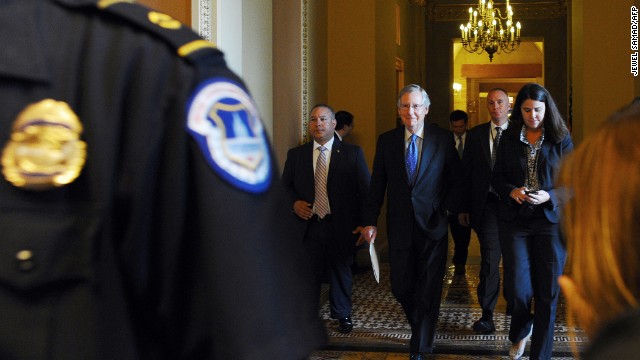 VOTE TONIGHT, ‘AFTER DINNER’: A Senate vote on an agreement to end the partial government shutdown and avert a possible U.S. default as soon as midnight could come sometime Wednesday evening, a senior GOP Senate aide told CNN's Ted Barrett. The aide said the vote was expected “after dinner” to give Senators time to read the measure. Meanwhile, a senior House GOP leadership aide said the House also could vote "as early as tonight" after the Senate acts. – Tom Cohen

THE DEAL: The deal funds the government through January 15, raises the debt limit until February 7, includes a provision in the deal that strengthens verification measures for people getting subsidies under Obamacare and sets up budget negotiations between the House and Senate for a long-term spending plan.

CRUZ WATCH: Sen. Ted Cruz of Texas, who famously filibustered a deal on the government shutdown, told reporters after a meeting with Republican leadership that he would not mount a filibuster or employ other procedural moves against the agreement.

GOP APPLAUSE FOR BOEHNER: House Republicans held an abnormally fast 20-minute caucus at 3:00 p.m. ET on Wednesday, where the Republican members gave Speaker John Boehner a standing ovation. Members leaving the meeting told CNN that Boehner urged the Republicans to live and fight another day. Majority Leader Eric Cantor, according to the members, gave an impassioned plea about Republicans not attacking each other or questioning the motives of the deal.

‘WE JUST DIDN'T WIN’: In an interview with a local radio station in Cincinnati, Boehner said Republicans “fought the good fight” but “just didn't win.” The speaker also said he will “absolutely” let the full House vote on the Senate plan, whether or not majority of GOP supports it.

WHILE HE WON’T NEGOTIATE, HE WILL SIGN: White House Press Secretary Jay Carney said: “He (President Obama) believes that this agreement achieves what's necessary in terms of reopening the government and removing the threat of default and the kind of brinksmanship that we've seen. We're not issuing an official statement of administration policy, but he looks forward to Congress acting so that he can sign legislation that will reopen the government and remove this threat from our economy.”

2014 WATCH FROM PETER HAMBY: With Chris McDaniel poised to mount a primary challenge to Mississippi Sen. Thad Cochran on Thursday, that makes six veteran Republican senators with primary fights on their hands: Mitch McConnell, Lamar Alexander, Pat Roberts, Lindsey Graham and Mike Enzi. While only a handful of their challengers might have the kind of mojo needed to knock off a wealthy incumbent, all of these old bulls hail from conservative states. They can't afford to take any tea party insurgent for granted, especially in Ted Cruz's America.

WATERCOOLER CHATTER: A joke buzzing around D.C.: “Washington Redskins drop the word "Washington" from their name because it's embarrassing.” (h/t to Ed Kennedy for the find)

TRAIL TRIVIA
(Answer below)
In the last 40 years, what year saw the lowest House reelection rate and what percentage of Congress was reelected?

Leading CNNPolitics: Time to throw my guy out of Congress?
It's conventional wisdom: Americans don't like Congress. But when it comes time to vote, they usually don't throw their lawmaker out of office. However, new polls indicate that times and perceptions about "throwing the bums out" may be changing. – Paul Steinhauser

Leading Drudge: Mercy!
Even if Congress reaches a last-minute or deadline-busting deal to avert a federal default and fully reopen the government, elected officials are likely to return to their grinding brand of brinkmanship – perhaps repeatedly. House-Senate talks are barely touching the underlying causes of debt-and-spending stalemates that pushed the country close to economic crises in 2011, last December and again this month. – Charles Babington

Leading HuffPo: 'Do Not Lump Me With The National Republicans. It's Unbecoming'
New York City mayoral candidate Joe Lhota (R) appeared to do everything he could Tuesday to distance himself from the overall GOP. Squaring off in the first televised debate against Democratic challenger Bill de Blasio, Lhota went on the defensive about being portrayed as a "national Republican." He claimed that his policies represent "long and hard" differences, from his pro-choice stance on abortion, to his support of gay marriage. – Chris Gentilviso

Leading Politico: Markets expect a deal — they better get one
Wall Street has so far mostly shrugged off the latest Washington political crisis, assuming an 11th hour deal will materialize to raise the debt limit and stave off a potentially ruinous default. But if the final act, which starts Wednesday, does not quickly produce the expected ending, the markets’ vengeance could be swift and severe. – Ben White and MJ Lee

Leading The New York Times: With G.O.P. Badly Divided, Boehner Is Left ‘Herding Cats’
Speaker John A. Boehner finds himself at a crossroads: an imminent financial default on the one hand, and on the other an unyielding conservative rank and file. – Ashley Parker and Jeremy W. Peters

- Republican senator: Our eye was off the ball (Obamacare) -
REPUBLICAN SEN. LINDSEY GRAHAM TALKING WITH REPORTERS ON CAPITOL HILL: "If you look back in time and evaluate the last couple of weeks, it should be titled 'the time of great lost opportunity,' because if we had been focusing on the failures of Obamacare in terms of its rollout and the way it's being implemented and the confusion it's caused, the numbers would have dramatically diminished in terms of public support. Democrats would be looking for reliable partners on the Republican side to correct (it). Instead, our numbers have gone down, Obamacare has somehow mysteriously gone up, and other than that this has been great."

- GOP friendly fire… -
THE WALL STREET JOURNAL EDITORIAL BOARD IN THE PAPER'S WEDNESDAY EDITORIAL: "The conservatives thus undermined whatever small leverage the House GOP had left. Without a united majority of 218 votes, Republicans might as well hand the Speaker's gavel to Senate Democratic leader Harry Reid. Senate leaders announced immediately that they would resume negotiating to finish a deal that they would bring to the floor as early as Wednesday."
THE HOUSTON CHRONICLE EDITORIAL BOARD IN THE PAPER'S WEDNESDAY EDITORIAL: "Does anyone else miss Sen. Kay Bailey Hutchison? … We miss her extraordinary understanding of the importance of reaching across the aisle when necessary. Neither sitting Texas senator has displayed that useful skill, and both the state and the Congress are the poorer for it. One reason we particularly believe that Hutchison would make a difference in these hectic days is that if she had kept her seat, Cruz would not be in the Senate."
STEVE DEACE IN A POST ON HIS SYNDICATED RADIO SHOW'S BLOG: "I loathe the GOP establishment with all my heart, but even I am embarrassed for them. They think they’re getting out of their consultants’ doghouse, but what they’re really doing is signing their own death certificates."

- … but not tea party groups -
JENNY BETH MARTIN, NATIONAL COORDINATOR FOR TEA PARTY PATRIOTS, IN A PRESS RELEASE: “The Ruling Elites in Washington, D.C. have completely abandoned the American people. The deal cut in the Senate does NOT protect the American people from this unfair and unworkable law. The Senate deal is a complete sellout.”

- Boehner 100% stronger –
REPUBLICAN REP. MICK MULVANEY OF SOUTH CAROLINA TALKS ABOUT WHETHER BOEHNER IS STRONGER IN AN INTERVIEW WITH CNN: “100 percent stronger. No one blames him for this. We did not have the votes. ... We could not get him the votes.”

Robert Costa (@robertcostaNRO)
Chuck Todd just made a good pt: McConnell, more than any R, is the one who's willing to take political risk/make 1st move to avert default

Amanda Carpenter (@amandacarpenter)
DC establishment is ready to walk away from the fight to defund Obamacare, just as liberals are clamoring for a delay.

Jason Johnson (@jasonsjohnson)
What just happened? DC establishment went all on bet that #Conservatives & any American who wants to change DC will shut up & go away.

Peter Hamby (@PeterHambyCNN)
shorter Joe Lhota ad: a vote for de Blasio is a vote for getting mugged in your grimy walk-up stairwell in 1986 http://www.youtube.com/watch?v=HO6waZDHBqA&feature=youtu.be

In 2012, despite low approval ratings for Congress – around 10% according to Gallup – a striking 90% of members were reelected. In fact, in the last 40 years, the House of Representatives reelection rate has never fallen below 85%.

In the last 40 years, only twice has the House's reelection rate fallen to its low point of 85% – during the 2010 election.

But according to a Pew Research survey released Tuesday, the traditional "hate Congress but love my congressman" is starting to turn.

Before the 2010 midterms – when the House reelection rate hit its 85% low – 34% of Americans said they would not support their member's reelection bid.