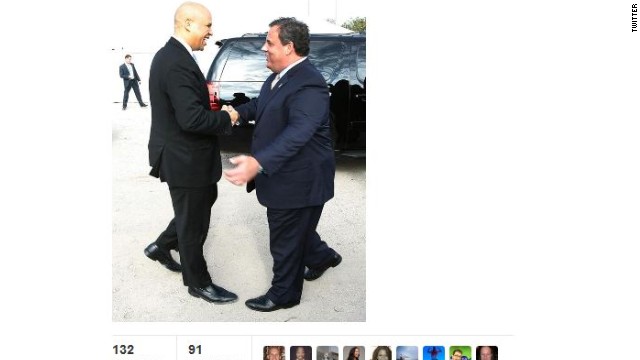 The two teamed up for the groundbreaking of a new supermarket in Newark, part of a push to improve urban communities.

The event comes two and a half weeks before New Jersey voters return to the polls to cast ballots in the state's gubernatorial election. Public opinion surveys consider Christie the overwhelming favorite in his re-election bid against Democratic state Sen. Barbara Buono.

"Today is another example of how people of different parties can work together and accomplish big things," Christie wrote Wednesday afternoon in a tweet that included a photo of the two men greeting each other.

.@corybooker Today is another example of how people of different parties can work together and accomplish big things. pic.twitter.com/sd2iGRtKTM

Christie, who's also mulling a bid for the 2016 GOP presidential nomination, has been touting his bipartisan accomplishments as he runs for re-election in a state where Democrats greatly outnumber Republicans.

Booker and Christie have worked closely together on projects in the past and the two are friends, but Booker told CNN anchor and Chief Washington Correspondent Jake Tapper that it doesn't mean he'll cross party lines to vote for Christie.

"When I look at all the issues, Barbara Buono is clearly in line with the voters of New Jersey," Booker told Tapper Thursday on "The Lead."

"I love how Tip O'Neill and Ronald Reagan in days of old had a real relationship, a real friendship. Would they have voted for each other, probably not. But their relationship helped move America forward. That's my philosophy."