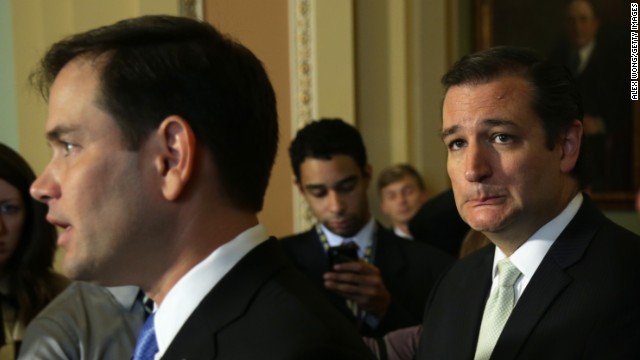 Washington (CNN) - The vote to end the shutdown took place in October 2013, but it may provide some clues about the 2016 race for the White House.

There are a bunch of potential presidential hopefuls in Congress, but since all Democrats voted lockstep to back a compromise to reopen the government and raise the debt ceiling, it's the Republican votes that are more interesting.

The least surprising vote among the possible GOP White House hopefuls belonged to freshman Sen. Ted Cruz of Texas. He was the most visible lawmaker in the tea party push to tie renewed government funding and borrowing authority to the new healthcare law, known as Obamacare. Cruz, of course, voted "no" Wednesday night and at numerous times throughout the day headed to cameras to rail against the agreement. While Cruz's actions made him more enemies among some congressional Republicans, it only endeared him more to tea party activists, grassroots conservatives, and others who make up much of the base that votes in the GOP primaries and caucuses.

Sen. Rand Paul of Kentucky has been outspoken about the possibility of running for president. But while he voted no, he was also very quiet during the extended partisan battle on Capitol Hill. "The storyline is that Rand Paul was not a leader in this fight," says Stuart Rothenberg, editor and publisher of the non-partisan Rothenberg Political Report. He was in an interesting position. While he's a hero among grassroots conservatives and tea party activists, Paul also appears to have a truce with his state's senior Senator, Minority Leader Mitch McConnell. It was McConnell who brokered the deal with Majority Leader Harry Reid.

The alliance, for now, keeps Paul from criticizing McConnell as the leader faces a conservative primary challenge as he runs for re-election next year. And it potentially helps Paul with establishment Republicans should he follow in his father's footsteps - former Rep. Ron Paul made three bids for president - and run for the White House.

"He's trying to show he can be a team player with the Republicans. Because if he campaigns for President, Paul has to run as a loyal Republican and can't be seen like his father, who was viewed as someone who wasn't loyal to the party. You can't win the nomination unless you are seen as a loyal Republican," adds Rothenberg.

This may explain why Paul wasn't out there leading the fight. But in the end his vote, which was not crucial to pass the agreement, was "a reflection of what he believes," says Rothenberg.

First term Sen. Marco Rubio of Florida also voted no, and his vote was also no surprise. Rubio's been very vocal in his opposition to the Affordable Care Act, better known as Obamacare. But he was much less visible than Cruz when it came to pushing the fight.

House Budget Committee Chairman Paul Ryan, the 2012 GOP vice presidential nominee, was a leader in the failed drive by the House Republican leadership to find consensus. But the congressman from Wisconsin ultimately voted no, going against the rest of the House GOP leadership. "I think no is a safer vote for someone with national ambitions," says Rothenberg. "If you are going to talk to Republican voters in 2015 and 2016, a "no" vote is much safer."

Rep. Peter King of New York was a vocal critic of Cruz, and the push to tie defunding Obamacare to the shutdown, throughout the saga, so his vote in favor of the agreement is no surprise. But King's vote won't endear him to the conservative GOP primary and caucus voters.