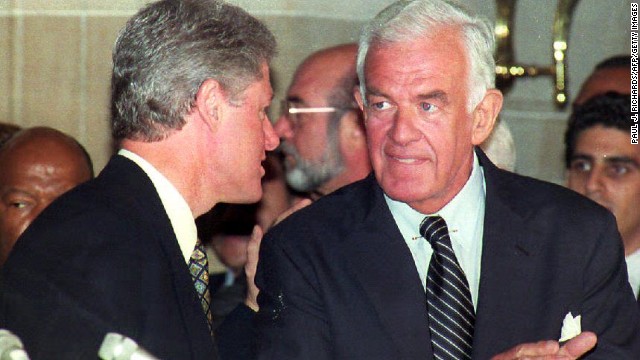 Foley, 84, was a Democrat who represented Washington state in the House for 30 years and served as speaker from 1989 to January 1995.

After his tenure on Capitol Hill, he was appointed U.S. ambassador to Japan by President Bill Clinton. He served from 1997 to 2001.

Foley became the 57th speaker in 1989 after then-Speaker James Wright resigned from office amid an ethics scandal.

Before taking that post, Foley served as House majority leader, majority whip and Agriculture Committee chairman, and was an influential member of the Select House Committee on Iran Contra.

He was first elected to the House in 1964, beating incumbent Republican Walt Horan, a 27-year veteran of the House.

Foley's career in Congress ended three decades later when he was defeated in 1994, the year Republicans retook the House in what is sometimes known as the "Republican Revolution." He was succeeded as speaker by then-Rep. Newt Gingrich of Georgia.

Current House Speaker John Boehner on Friday said Foley's rise to speaker was a "natural sequence for a natural leader."

"Forthright and warmhearted, Tom Foley endeared himself not only to the wheat farmers back home but also colleagues on both sides of the aisle," Boehner said in a written statement. "That had a lot to do with his solid sense of fairness, which remains a model for any Speaker or representative."

President Barack Obama said in a statement that Foley had a "straightforward approach" and represented his constituents with "skill, dedication, and a deep commitment to improving the lives of those he was elected to serve."

Former President George H.W. Bush said that Foley "represented the very best in public service - and our political system" and "never got personal or burned bridges."

Foley had a largely liberal record in Congress, supporting Great Society programs and opposing the Vietnam War. He was pro-abortion rights, backed the Equal Rights Amendment, and opposed capital punishment, as well as a constitutional amendment allowing school prayer.

"Our country mourns the loss of a leader whose authenticity, dedication, and diplomacy will forever serve as an example to all of us who strive to make a difference through public service," Pelosi said in a written statement.

Foley graduated from the University of Washington in 1951 and from Washington Law School in 1957. In his legal career, he served as assistant attorney general for Washington state and deputy prosecutor in Spokane County.

Before running for Congress, Foley worked as a special counsel to the Senate Interior and Insular Affairs Committee from 1961 to 1964.

Foley is survived by his wife, Heather, whom he married in December 1968.