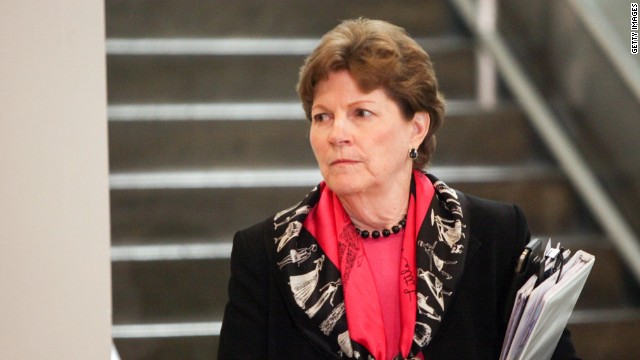 Washington (CNN) - New Hampshire Sen. Jeanne Shaheen joins the growing ranks of Republicans asking the President to extend open enrollment under Obamacare. The only difference is that she is a Democrat.

In an open letter to President Obama, Shaheen says because of the problems affecting HealthCare.gov, the administration should push back the deadline and lift the penalty for those who are uninsured. The law currently stipulates that enrollment in the Obamacare insurance exchanges ends March 31, 2014, and that those who are uninsured after that point will be fined by the Internal Revenue Service.

[twitter-follow screen_name='politicalticker']
"As website glitches persist, we are losing valuable time to educate and enroll people in insurance plans," writes Shaheen. "I also fear that people that have tried, and failed, to enroll online may become frustrated and not return to the website to try again at a later date. ... Allowing extra time for consumers is critically important so they have the opportunity to become familiar with the website, survey their options and enroll."

"If an individual is unable to purchase health insurance due to technical problems with enrollment, they should not be penalized because of lack of coverage."

Jay Carney: Site glitches may excuse those without insurance from penalty next spring

Shaheen may be the first Democrat to make the argument, but several Republicans have already weighed in on this debate. Sen. Marco Rubio, R-Florida, announced Tuesday morning that he will introduce such legislation when the Senate reconvenes next week.

"It's not fair to punish people for not buying something that's not available," he said on CBS' "This Morning."

In the House, Rep. Trey Radel, R-Florida, will bring similar legislation to the floor.

"HealthCare.gov and its Spanish counterpart, where you can shop for health insurance, is completely unusable," he said in a news release Tuesday. "This bill delays the Obamacare fine on you and your family until you can actually sign up for health coverage, a common sense concept lost on an administration determined to force this law on you at any cost.”

Shaheen is no turncoat in the war over Obamacare. Her letter offers high praise of - and some patient frustration with - the law.

After highlighting many of the law's advantages, she writes, "Ultimately, however, we must do better. As you continue to fix problems with the website and the enrollment process, it is critical that the administration be open to modifications that provide greater flexibility for the American people seeking to access health insurance – extending the open enrollment period and clarification on the enforcement and administration of the individual responsibility penalty would be a great start."