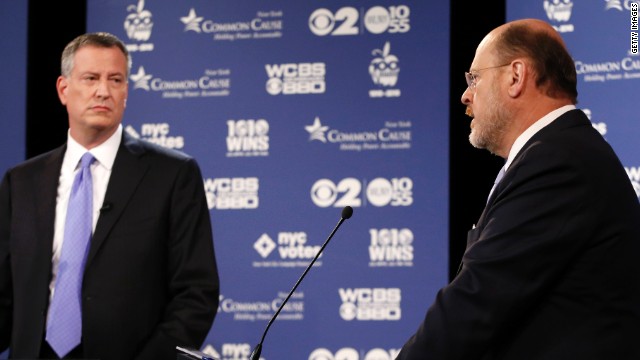 NYC mayoral candidates agree, when not talking over each other

(CNN) – New York City mayoral candidates Bill de Blasio and Joe Lhota actually managed to agree with one another on several points during a Tuesday-night debate that was often amicable. When it wasn’t amicable however, sparks flew.

One of the most intense points of contention came on public safety. Lhota, a Republican and the former head of the city transit authority, favors the controversial stop-and-frisk policing tactics of outgoing independent Mayor Michael Bloomberg. He also put out a web video charging that de Blasio would make city streets less safe.

De Blasio, the Democratic nominee, in turn attacked the ad, calling it and the tactics behind it “divisive.”

“Everybody looking at that ad knows what he's up to,” de Blasio said. He drew one of Lhota’s most heated reactions when comparing the ad to what he called the divisive tactics of Republican Mayor Rudy Giuliani, under whom Lhota served as deputy mayor.

Lhota raged that he was sick and tired of de Blasio impugning Giuliani, while de Blasio defended his charges against the former mayor.

De Blasio’s whopping lead in the polls makes him poised to be the first Democrat elected mayor in more than two decades. The city public advocate, he has called for an end to stop-and-frisk, calling it racial profiling. He’s also called for an inspector general for the NYPD, a position that Lhota and Bloomberg vehemently oppose, with Lhota calling it needless and onerous.

The debate was not entirely acrimonious, however. Both men expressed trepidation with using city parkland for business development, both want increased cab service for the residents outside Manhattan and both put a priority on increased public housing, albeit by different tactics.

Another major point of contention was taxes. De Blasio wants to raise taxes on those earning more than $500,000 a year to pay for universal pre-kindergarten.

“I think it’s fair,” de Blasio said of the tax hike. Universal pre-k and afterschool programs for middle schoolers, de Blasio’s core issues, are “in the interest of all,” he said.

De Blasio and Lhota will face off in one more debate before heading into the election now two weeks away.