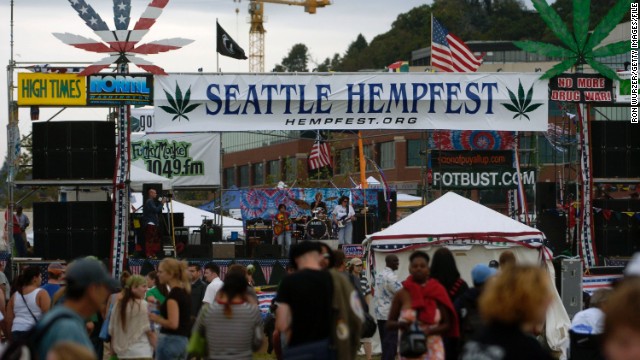 (CNN) - More Americans think that marijuana should be legalized than those who want it kept illegal, according to a new poll.

According to the Gallup poll, 58% say that pot should be legalized, the first time in Gallup polling that a clear majority favor the move. Thirty-nine percent oppose legalization.

The 58% in favor of legalization is far removed from the 12% who said the same thing when Gallup first started asking in 1969, and it's up 10 percentage points since last November. The increase comes after a slight dip from when those supporting legalization first hit half the survey population, 50%, in 2011.

CNN's Sanjay Gupta: Why I changed my mind on weed

The survey attributes much of the pro-marijuana momentum to public referendums last year in Colorado and Washington state that made pot legal. Among those surveyed, 38% admitted to having tried the drug themselves.

Attorney General Eric Holder has said the Department of Justice will not seek to block the Colorado and Washington laws.

Federal enforcement of marijuana laws in the so-called "War on Drugs" has declined under the Obama administration. Justice has issued guidelines to federal prosecutors telling them to no longer pursue mandatory-minimum sentences against low-level nonviolent drug offenders.

Most support for legalization comes from Democrats, 65%, and Independents, 62%. About one in three Republicans, 35%, agreed. The younger the respondent, the more likely they were to favor legalization: 67% for 18 to 29 year-olds compared to 62% for those 30 to 49. and 56% for those between 50 and 64. Only those 65 and older reported less than half in favor of legalizing marijuana, at 45%.

The Gallup poll was conducted October 3-6, with 1,208 adults nationwide questioned by telephone. The survey's overall sampling error is plus or minus four percentage points.