In final round of Virginia gubernatorial debates, candidates keep up verbal slugging – neither scores knockout

(CNN) – In a race already peppered with heated rhetoric and negative campaign ads, the attacks did not let up in the third and final debate between the two candidates vying for Virginia’s governor.

Leading in the polls since the partial federal government shutdown, Democratic candidate Terry McAuliffe hit opponent Ken Cuccinelli over social issues like abortion and gay rights while Cuccinelli fought back, linking McAuliffe to Obamacare and its rocky roll-out, asking "Why would we expand failure?”

Issues discussed ranged from gun control to bipartisan compromise in the wake of Washington’s shutdown showdown. Though the attacks varied little from previous debates, the candidates hit the ground running, first decrying their opponent’s respective financial plans for the Commonwealth.
END_OF_DOCUMENT_TOKEN_TO_BE_REPLACED

Clinton: ‘We are careening from crisis to crisis’

Washington (CNN) – Speaking to a friendly audience Thursday, former secretary of state Hillary Clinton continued to argue that progressive ideas and policies are under threat by political gridlock in Washington.

“We are careening from crisis to crisis - instead of having a plan, bringing people to that plan, focusing on common sense solutions and being relentless in driving toward them,” she said in her brief remarks at a 10th anniversary event for the Center for American Progress.

Clinton recalled the formation of the progressive think tank a decade ago.
END_OF_DOCUMENT_TOKEN_TO_BE_REPLACED

(CNN) - Health Secretary Kathleen Sebelius is again pushing back against calls for her resignation over the rocky rollout of the Obamacare website, saying “we are determined to make it perfect.”

While visiting a health insurance call center in Phoenix on Thursday, Sebelius stuck to the Obama administration’s line that the functionality of the online insurance marketplace Healthcare.gov is improving.
END_OF_DOCUMENT_TOKEN_TO_BE_REPLACED

(CNN) - House Oversight Committee Chairman Darrell Issa is raising the threat of a possible subpoena if Health Secretary Kathleen Sebelius doesn't respond to his panel's questions and requests for documents about problems with the Obamacare website. Committee aides say Sebelius has failed to respond to a previous request and he's now giving her until Monday to comply or possibly face "compulsory" action.

After a Congressional hearing Thursday dissecting the problems plaguing healthcare.gov, the federal Centers for Medicaid and Medicare Services that oversees the new programs under the health care law said almost 700,000 applications have been submitted online on either the federal or state websites.
END_OF_DOCUMENT_TOKEN_TO_BE_REPLACED

“Promoting the right to vote, guaranteeing marriage equality, treating immigrant people with respect and with dignity, these things are also things that make Maryland stronger and more competitive economically,” O’Malley told a forum at the left-leaning Center for American Progress.
END_OF_DOCUMENT_TOKEN_TO_BE_REPLACED 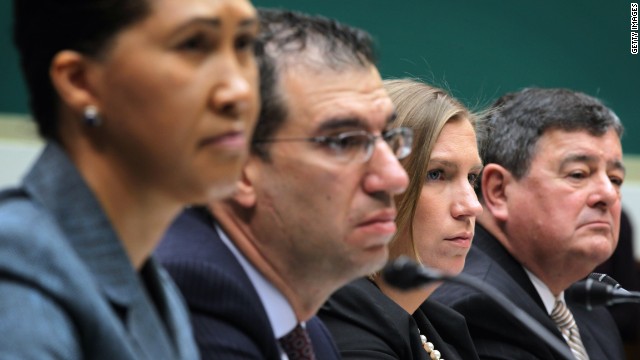 BREAKING: Former Vice President Al Gore condemned the controversial Keystone XL pipeline Thursday, calling the proposed project an “atrocity.” “This should be vetoed. It is an atrocity. It is a threat to our future,” Gore said during a speech at a policy forum held by the left-leaning Center for American Progress. – Alison Harding

POINTING FINGERS: Contractors on the problem-plagued website for President Barack Obama's signature health care reforms blamed the government and each other, but not themselves, at the first congressional hearing on the troubled online enrollment system. – Tom Cohen

END_OF_DOCUMENT_TOKEN_TO_BE_REPLACED

What we learned – and didn't - from Obamacare website hearing

Washington (CNN) - The congressional hearing lasted for 4½ hours. Of the thousands of words spoken between what seemed like all 54 members on the House committee roster and four witnesses representing government contractors responsible for healthcare.gov, five things could be taken away.

“This should be vetoed. It is an atrocity. It is a threat to our future,” Gore said during a speech at a policy forum held by the left-leaning Center for American Progress.
END_OF_DOCUMENT_TOKEN_TO_BE_REPLACED

“I wanted just to come here this afternoon…to reflect on the damage that events like the one we’ve just been through can do to the esteem in which the U.S. is held in the world, a key component of our national power,” Kerry said at a Center for American Progress forum.
END_OF_DOCUMENT_TOKEN_TO_BE_REPLACED