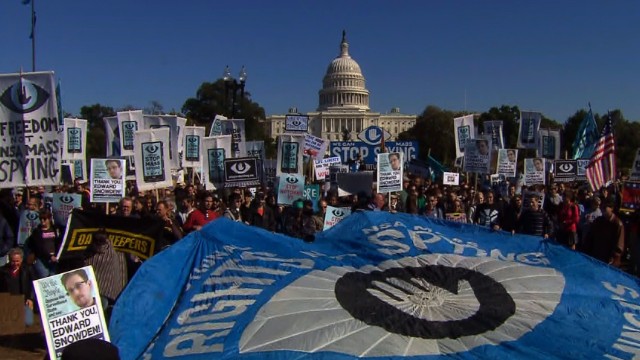 (CNN) – Hundreds rallied in front of the Capitol on Saturday in protest of the National Security Agency's surveillance programs and demanded a congressional investigation and reform of the laws governing the agency.

“This isn't a partisan issue. This is for Republicans, Democrats, Libertarians, conservatives and liberals, everyone in between,” said Rep. Justin Amash, R-Michigan, who proposed an amendment to rein in the NSA surveillance programs but was defeated in July by a thin, seven-vote margin.

Amash touted the bipartisan U.S.A. Freedom Act, aimed at limiting the mass collection of data by NSA and authored by Rep. Jim Sensenbrenner, R-Wisconsin, one of the original authors of the Patriot Act. The bill could be brought to the House floor as early as this week.

A statement, provided to the American Civil Liberties Union, from former NSA contractor Edward Snowden was read at the rally.

Snowden said in part: “We've learned that the U.S. intelligence community secretly built a system of pervasive surveillance. Today, no telephone in America makes a call without leaving a record with the NSA. Today, no internet transaction enters or leaves America without passing through the NSA's hands. Our representatives in Congress tell us this is not surveillance. They're wrong.”

Thousands of documents leaked by Snowden have portrayed the vast reach of U.S. surveillance activities, tracking not only on U.S. call data but also global Internet and e-mail traffic.