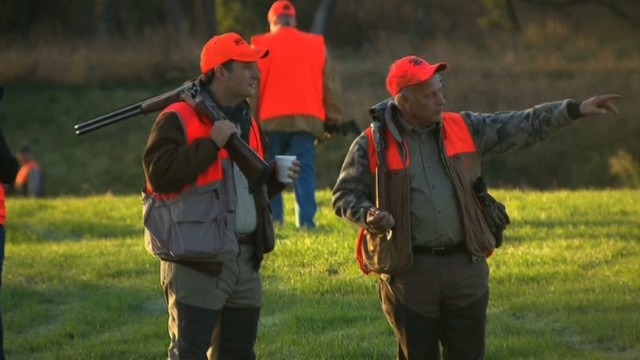 (CNN) - Decked out in blaze orange and tan hunting gear with a coffee in one hand and a shotgun in the other, tea party favorite Texas Sen. Ted Cruz took his anti-Washington establishment tune to the Hawkeye state Saturday morning, pheasant hunting on opening day with GOP Rep. Steve King.

Health and Human Services Secretary Kathleen Sebelius should “absolutely” step down, Cruz said, perched at the bar at the Hole N' the Wall Lodge in Akron, Iowa, eating eggs and answering questions from journalists before the hunt.

"Obamacare is a disaster. You have the well-publicized problems with the website. It just isn't working,” he said.

"This administration has turned a cold heart to the millions of Americans who are suffering, who are pushed into part-time work. There are single moms all over this country trying to feed their kids on 29 hours a week because of Obamacare, and this administration has said that there will be no relief for the people who are hurting because of this failed policy.”

Delays and incorrect information relayed to insurance companies has sparked intense criticism from Republicans over the implementation of President Barack Obama’s sweeping healthcare initiative. House Republicans, spearheaded by Cruz, tried without success earlier this month to tie defunding or delaying the law to legislation funding the government.

The hunt kicked off with a prayer asking for safety and expressing appreciation for the Second Amendment. Cruz said he has hunted a number of other birds, including quail and dove, but Saturday would be his first time hunting pheasant. And, though he enjoys the sport, he admitted "in the world of experienced hunters I don't stack up."

When asked about the parallels of his visit and that of former presidential candidate and Texas Gov. Rick Perry's similar trip in 2011, Cruz called it a "dangerous comparison."

"Well you know, that's a very dangerous comparison on a lot of fronts, not least of which is that Gov. Perry is a lot better shot than I am. So I'm going to avoid making that comparison," he joked.

Cruz has not endorsed a candidate in Iowa's increasingly crowded 2014 Republican primary for the open Senate seat left vacant by retiring Sen. Tom Harkin, though he did leave open the possibility of throwing his support behind one of the conservatives at a later date.