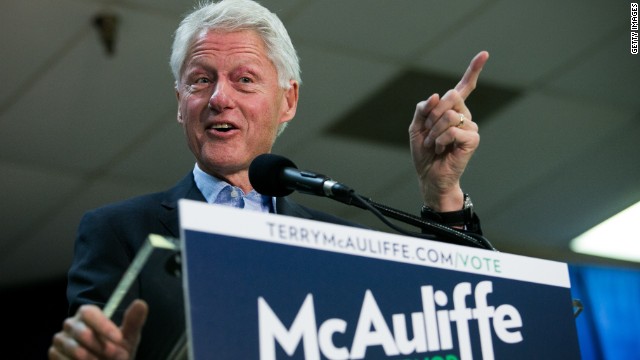 With Virginia Democrats increasingly confident that an Election Day sweep is in the making, gubernatorial nominee Terry McAuliffe enlisted former President Bill Clinton, his longtime friend and confidante, to fire up the party base and drive them to the polls one week from Tuesday.

Clinton is headlining a three-day, nine-city campaign tour on behalf of McAuliffe, hitting each of the state’s major media markets, from traffic-clogged Washington, D.C. suburbs to the rolling coal country of southwest Virginia.

“Every one of you has just nine days now to first, make up your mind to be there, and second, to make up your mind that you're going to get as many people as you can to join you,” Clinton told an audience of nearly 400 people at Richmond Community High School in the city’s heavily African-American north side.

“Terry McAuliffe is my friend, and if he were 50 points behind I would be here,” Clinton said. “I love the guy.”

It was the second of three appearances Clinton would make Sunday, cutting a path from northern Virginia down to Hampton Roads, a swing that took him through the most populous crescent of the commonwealth.

The events came a week after Hillary Clinton campaigned for McAuliffe, her first political appearance since departing her post as Secretary of State earlier this year.

Clinton opened the day with McAuliffe in Dale City - an exurban community in Prince William County, one of the state’s political bellwethers - delivering a similar warning about the dangers of depressed Democratic turnout.

Republicans traditionally participate in greater numbers in midterm and off-year elections. The turnout edge has some Democrats here worried that the final margin will be much closer than polls indicate.

The same message was hammered home in Richmond by a platoon of brand name Virginia Democrats who joined McAuliffe and Clinton on stage, including former Gov. Doug Wilder and Sen. Tim Kaine, a former Richmond mayor who resides on the city’s north side.

By contrast, Kaine said McAuliffe will be "a practical, problem-solving elected official every day."

McAuliffe repeatedly referred to himself and the Democrats running for the state’s top offices –lieutenant governor candidate Ralph Northam and attorney general candidate Mark Herring – as “the mainstream ticket,” a trio focused on kitchen table issues like education and traffic congestion.

The most recent survey of the race, a Quinnipiac University poll released last week, showed McAuliffe with an 8-point lead over Cuccinelli, who has been swamped by a deluge of attacks ads from Democrats.

McAuliffe, a well-connected and voluble fundraiser who once helmed the Democratic National Committee, out-raised Cuccinelli by nearly $3 million last month.

Asked to respond to the Clinton rallies, the Cuccinelli campaign sought to highlight recent stories about McAuliffe’s questionable
investments: one in which McAuliffe profited from a complicated annuity scheme involving life insurance benefits, and another involving a union-focused insurance company.

"While Terry McAuliffe campaigns with President Clinton, we wonder whether the gubernatorial candidate will finally answer critical questions,” said campaign spokesman Anna Nix. “At the top of the list of questions his campaign still refuses to answer is whether McAuliffe knowingly profited off of the death of others. Another will be why he opened a $750,000 line of credit benefiting a union company. President Clinton won't be able to answer those questions for him. It’s time for Terry McAuliffe to tell the truth."

Cuccinelli is bringing in his own outside help this week, campaigning with Kentucky Sen. Rand Paul and Louisiana Gov. Bobby Jindal, two Republicans with designs on the White House in 2016.

Though several voters here were thrilled to see the former President in their backyard, few seemed to express natural enthusiasm for McAuliffe.

While crowded, the high school auditorium where Clinton and McAuliffe spoke Sunday was hardly full: Volunteers cordoned off one section of empty seats with a large American flag, and other vacant rows were hidden by conveniently placed drapes.

Kimberly L. Winn, a self-described community advocate from Richmond who said she is a registered Democrat, came to the event solely to see Clinton. Asked if she planned to vote for McAuliffe, she grimaced and shook her head.

Pointing to the negative back-and-forth between McAuliffe and Cuccinelli, Winn said she plans to vote for Robert Sarvis, the Libertarian nominee who has reached double digits in a number of recent polls.

“People need health care. Kids are hungry. People are wondering where their next paychecks are going to come from,” Winn said. “And these people are spending millions of dollars slandering and backbiting their opponent? Stop it. Who cares?”