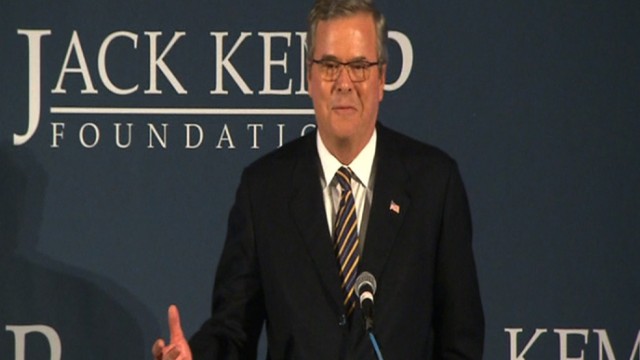 (CNN) - A prominent figure in the Republican party and one to watch as 2016 approaches, Former Florida Gov. Jeb Bush Monday night offered a fiscal and social blueprint for the conservative movement, pushing for economic freedom and a repeal of Obamacare.

Speaking before a crowd of who's-who in the Republican Party, Bush decried Washington's current fiscal path as bogged down with unnecessary bureaucratic regulations and laden with policies that benefit the rich while disenfranchising the working-class.

"Our current policy awards portfolio Americans at the expense of pay check America while enabling the greatest sustained deficits in American history," he said in Washington at the Jack Kemp Foundation annual dinner. "We should let market forces, not crony capitalism, decide where to invest and how to incentivize it's citizens to conserve."

"Conservatives need to advance economic freedom by working to repeal Obamacare and replacing it with a system that is consumer directed, less-coercive and significantly less costly," Bush said, ticking through a number of GOP hot-button issues, including immigration, education and the traditional family unit.

"Much of the debate over our nation's immigration policies have been dominated recently by explosive political rhetoric," Bush said. "The conversation has largely ignored the economic imperative of fixing a broken immigration system."

Education, he added, is the "civil rights issue of our time" while the integrity of the traditional family unit is suffering.

"The family structure of the United States has we have known it for centuries is crumbing. Those on the left instinctively call for another government program," Bush said. "But you know that government cannot fill this void."

Bush is the brother of former President George W. Bush and son of former President George H. W. Bush, and is considered a possible contender for the 2016 presidential race. Unlike Rubio and Ryan, two other possible presidential hopefuls, who at last year's dinner joked about their 2016 prospects, Bush did not mention a potential bid for the White House.