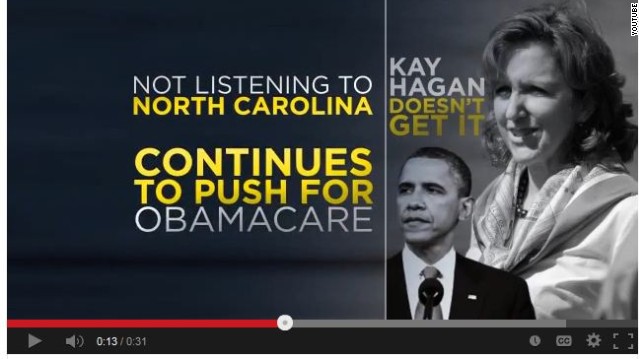 (CNN) – Conservative advocacy group Americans for Prosperity plans to launch a significant ad buy against a pair of vulnerable Senate Democrats over their stance on Obamacare.

According to a statement Tuesday, the group says it will spend over $2 million on a series of TV, radio and web ads going after Senators Kay Hagan of North Carolina and Mary Landrieu of Louisiana.

AFP says $1.7 million will be spent against Hagan in North Carolina and more than $500,000 will be used to go after Landrieu in Louisiana. The ads are primarily meant for mothers, the decision-makers of the family, the group said in the statement.

"Kay Hagan just doesn't get it," claims the narrator in an ad going after the North Carolina Democrat. "Instead of listening to North Carolina, Hagan continues to push for Obamacare," it charges, going after the subsidies granted to members of Congress and their staff by the Obama administration.

The ad attacking Landrieu admonishes that voters didn't want the law she supported. "Now, we are paying the price," it says.

"For millions of Americans, Obamacare has meant less choice, higher premiums, and the cancellation of health care plans they were promised they could keep," AFP President Tim Phillips said in the statement.

"And what has been the response from some of these lawmakers? Doubling down on a bad law, but making sure to give special treatment for themselves and political allies under the law. Our job is to hold them accountable for that."

"It's no surprise that the same special interest groups that dictate a reckless and irresponsible Republican agenda have launched desperate and false attack ads in an attempt to prop up their struggling candidates in North Carolina and Louisiana," DSCC spokesman Justin Barasky said in a statement.

"No amount of special interest smears will change the fact that both Mary Landrieu and Kay Hagan have strong records of working across the aisle and fighting for middle class families and small businesses in their states."

This is not the first time AFP has gone after vulnerable Democrats over the health care law, nor is it likely to be the last. Last week, the group launched ads praising two House Republicans who opposed Obamacare and condemning two House Democrats who supported it.

Americans for Prosperity is partially funded by the billionaire industrialist Koch brothers, who have spent millions of dollars to back conservative causes and candidates.