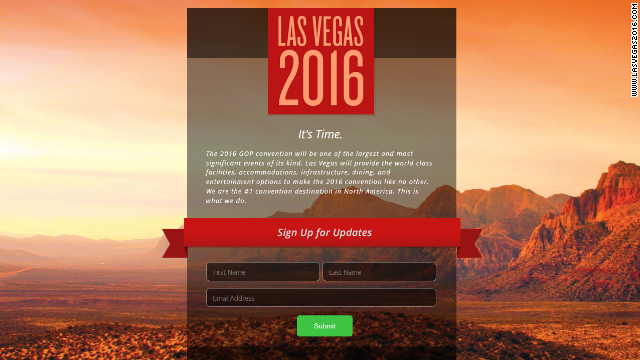 (CNN) – What happens in Vegas … goes to the White House?

That's what the Nevada Host Committee, Inc. is hoping. The group has made a formal bid to bring the 2016 Republican National Convention to Las Vegas.

It may seem early to bid for a convention scheduled for three years from now but hosting a national convention is a major undertaking for any city, no matter how well equipped. The Republican National Committee usually makes its choice two years in advance.

"Hosting a convention is a huge deal. A city has to raise multiple millions of dollars, but they also get the benefit of showcasing their city and bringing in revenue," Holly Hughes, who chaired the RNC Site Selection Committee, told CNN in 2012 before Tampa was selected for the 2012 convention.

The committee will make site visits and try to anticipate how the city will handle the influx of delegates, politicians and media outlets. It may also consider other potential complications such as weather.

The schedule for the 2012 convention was held up by Tropical Storm Isaac last August. Las Vegas doesn't see many tropical storms in August, but the temperature often gets up into the 100s.

However, the campaign for Las Vegas described accommodations that would keep delegates and other visitors air conditioned.

"With nearly 150,000 hotel rooms, Las Vegas could have hosted all the attendees of the Tampa GOP Convention inside a one-mile radius and within a mile of the airport," according to the campaign.

"Las Vegas is the number one convention destination in North America. We do it better than anyone else in the country," Nevada Lt. Gov. Brian Krolicki said in a statement.

The bid is backed by members of the Nevada business and hospitality industry, as well as Krolicki, who is the chair of the committee.

Kansas City, Missouri, has also made a formal pitch to host the 2016 RNC event.

"Bringing the RNC to KC is just another chance to showcase our community. We did it with the All-Star games – for both Major League Baseball and Major League Soccer and we do it every time a visitor steps off of a plane and every time we step onto a national stage," wrote Kansas City Mayor Sly James in a blog post explaining his August visit to an RNC meeting in Boston.

The RNC's future pick is not just about the numbers, the chosen city will provide the backdrop for a candidate and party hoping to end up in the White House.

For example, in 2012 both parties held conventions in swing states – the Republicans' choice of Florida and the Democrats' choice of North Carolina was seen as strategic. Nevada is also considered a swing state, with President Obama taking the state in 2012 and 2008, but Republicans carrying it in 2004 and 2000 with wins for President Bush.

A successful convention in Las Vegas would put the spotlight squarely on the GOP with local voters.

Other cities rumored to be interested in hosting the 2016 convention are Salt Lake City, Phoenix and Charlotte, North Carolina.