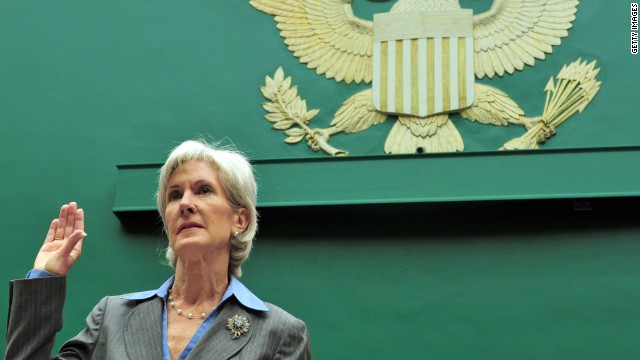 “I APOLOGIZE” … In a testy hearing on Capitol Hill, Health and Human Services Secretary Kathleen Sebelius started with contrition, “Let me say directly to these Americans, you deserve better. I apologize. I'm accountable to you for fixing these problems. And I'm committed to earning your confidence back by fixing the site.”

IT ALL COMES BACK TO “THE PROMISE”:

REP. MARSHA BLACKBURN, R-TN.: Madam Secretary, during - before, during and after the law was passed, the President kept saying, "if you like your health care plan, you can keep it," so is he keeping his promise?

SEBELIUS: Yes, he is.

CHANGE! THE (NEW) PROMISE ON KEEPING YOUR HEALTH CARE: PRESIDENT OBAMA SPEAKING IN BOSTON TODAY: “Now if you had one of these substandard plans before the Affordable Care Act became law and you really liked that plan, you were able to keep it. That's what I said when I was running for office. That was part of the promise we made. But ever since the law was passed, if insurers decided to downgrade or cancel these substandard plans, what we said under the law is, you've got to replace them with quality, comprehensive coverage because that too was a central premise of the Affordable Care Act from the very beginning.”

Gut Check Flashback
READ HIS LIPS: REMARKS BY THE PRESIDENT AT THE ANNUAL CONFERENCE OF THE AMERICAN MEDICAL ASSOCIATION ON JUNE 15 2009: "So let me begin by saying this to you and to the American people: I know that there are millions of Americans who are content with their health care coverage. They like their plan and, most importantly, they value their relationship with their doctor. They trust you. And that means that no matter how we reform health care, we will keep this promise to the American people: If you like your doctor, you will be able to keep your doctor, period. If you like your health care plan, you'll be able to keep your health care plan, period. No one will take it away, no matter what. My view is that health care reform should be guided by a simple principle: Fix what's broken and build on what works. And that's what we intend to do."

CNN: NOT THE FULL STORY Jake Tapper explains, “Ah ... the government is not going to make you change plans. Though the government might impose a situation that would cause a change of plans. So the promise was never quite as presented. And yet the president kept presenting it that way.”

WASHINGTON POST FACTCHECKER: FOUR PINOCCHIOS
“The administration is defending this pledge with a rather slim reed — that there is nothing in the law that makes insurance companies force people out of plans they were enrolled in before the law passed. That explanation conveniently ignores the regulations written by the administration to implement the law.”

BLACKBURN: Can you give me a ballpark on what you have spent on this website that does not work, that individuals cannot get to? What is your cost estimate?

SEBELIUS: So far, Congresswoman, we have spent about $118 million on the website itself, and about $56 million has been expended on other IT to support the web.

SECRET LETTER?? ABC’s Rick Klein is reporting that all of the female Democratic senators signed a secret letter to Hillary Rodham Clinton early this year encouraging her to run for president in 2016 – a letter that reportedly includes the signature of Sen. Elizabeth Warren and other senators who are mentioned as potential candidates, two high-ranking Democratic Senate aides told ABC News. -Rick Klein

Which is more frequently listed by members of Congress as their occupation, doctor or farmer?

Leading CNNPolitics: Government memo warned of high security risk at health care website
An internal government memo obtained by CNN and written just days before the start of open enrollment for Obamacare warned of a "high" security risk because of a lack of testing of the HealthCare.gov website – Joe Johns

Leading Drudge: THE MOST HATED WOMAN IN AMERICA
It’s Kathleen Sebelius’s turn now. On the Hill, they’re calling for her resignation and tossing around words like “subpoena.” Pundits are merrily debating her future. (She’s toast! Or is Obama too loyal to fire her so soon?) Her interviews, more closely parsed than usual, seem wobbly. Though never a colorful presence on the political scene, she’s suddenly a late-night TV punch line. – Amy Argetsinger

Leading HuffPo: Virginia Polls Show Terry McAuliffe Leading Ken Cuccinelli By Either A Little Or A Lot
Two respected polls have produced conflicting stories about the standings in Virginia's race for governor. With less than a week to go before the election, Democrat Terry McAuliffe either has a "substantial" advantage over Republican Attorney General Ken Cuccinelli or is "clinging" to a narrow lead. – Mark Blumenthal

Leading The New York Times: Where the Buck Stops, Some See a Bystander
President Obama finds himself under fire on two disparate fronts these days, both for the botched rollout of his signature health care program and for the secret spying on allied heads of state. In both instances, his explanation roughly boils down to this: I didn’t know. – Peter Baker

- RomneyCare is back –
REMARKS BY PRESIDENT OBAMA AT THE FANEUIL HALL IN BOSTON: “Now, Mitt Romney and I ran a long and spirited campaign against one another. But I've always believed that when he was governor here in Massachusetts he did the right thing on health care. And then Deval did the right thing by picking up the torch and working to make the law work even better. And it's because you guys had a proven model that we built the Affordable Care Act on this template of proven, bipartisan success.”

- Romney: Health care should be left to the states –
MITT ROMNEY’S STATEMENT ON THE NATIONAL HEALTH CARE ROLLOUT AND PRESIDENT OBAMA’S VISIT TO BOSTON: “In the years since the Massachusetts health care law went into effect nothing has changed my view that a plan crafted to fit the unique circumstances of a single state should not be grafted onto the entire country. Beyond that, had President Obama actually learned the lessons of Massachusetts health care, millions of Americans would not lose the insurance they were promised they could keep, millions more would not see their premiums skyrocket, and the installation of the program would not have been a frustrating embarrassment. Health reform is best crafted by states with bipartisan support and input from its employers, as we did, without raising taxes, and by carefully phasing it in to avoid the type of disruptions we are seeing nationally.”

- Rush: This is insulting –
RUSH LIMBAUGH RESPONDING TO VALERIE JARRETT TWEET THAT OBAMACARE DOESN'T FORCE YOU OFF YOUR HEALTH CARE PLAN: "This is worse than disingenuous. It's worse than just out-and-out lying. This is insulting. ‘Obamacare doesn't force you off your plan. Your insurance company does.’ The only reason the insurance companies with are changing anything is like everybody else: They've got to change to comply with what the law is."

Jay Newton-Small (@JNSmall)
Is it just me or does the @BarackObama cabinet only exist to occasionally get thrown under the bus?

James Martin, SJ‏ (@JamesMartinSJ)
If it's true that the NSA has been spying on Vatican officials, and cardinals and the future pope, even during the conclave we should ask...

Forbes (‏@Forbes)
Putin is the most powerful person in the world: http://onforb.es/1aCFfhD (Obama is No. 2) #powerfulpeople

Twenty members describe themselves as physicians, including one ophthalmologist. There are also two dentists, two veterinarians, one psychiatrist and three psychologists.