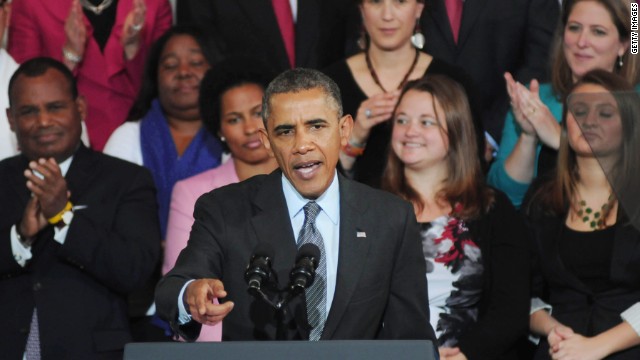 Obamacare and MassHealth – What do people think?

Boston (CNN) - What do folks in Massachusetts think of the state's mandatory medical care law, and more importantly what do they think of President Barack Obama using it as an example of what Obamacare will eventually look like?

Well, just like any political story, it depends on whom you ask.

Take Massachusetts resident Sara Penrod. She grew up in Alabama, and moved to the Bay State five years ago. Since she moved here, she joined the state's MassHealth program. That's the program that 2012 Republican presidential Mitt Romney signed into law last decade when he served as Massachusetts governor. It's the same program the President touted in a Wednesday visit to Boston as the model for the Affordable Care Act. The Massachusetts measure requires every state resident over 18 years old to have health insurance.

Penrod told CNN she is a fan of both the president's program, and MassHealth,

"In Alabama you can't get insurance unless you basically make no money." said Pernod, who told CNN she was invited to the President's event.

"I have a severe chronic illness that would cost me over $3000 a month just for the medication, so MassHealth really saved my life," Pernod added.

She said the program was easy to join, and she, "went online and printed up the application."

Deborah Berry, another Massachusetts resident, had a similar story.

"My MassHealth is wonderful, I mean I had open heart surgery and without that I wouldn't have been able to have it and as far as I'm concerned it's good," Berry said.

She added that the program covered all of her medical bills while she was hospitalized and, "my medication and checkups and dental and eyecare – it covered that for me."

Berry said she moved to Massachusetts from Memphis, Tennessee and did not have health insurance before she joined the state program.

"It was a pleasant experience," she said as she walked away.

However Kelly, from Worcester who declined to give her last name, told CNN she has her health insurance through her work. She says her premiums and co-pays have gone up, "every year."

When asked if she thought ObamaCare would help or hurt her health care premiums, she smiled and replied, "I think it's gonna cost us a little bit more."

She added that her deductibles, "just keep going up too, yeah."

Business owner John Hoskins, who is visiting the Bay State from Buffalo, New York has a different take on the president's health care plan. He said the program is costing him and his employees three to six percent more for health care.

"It's a direct result of Obamacare, absolutely," said Hoskins.

When asked to explain how he knew the costs were because of the president's health care plan, he said, "We've had analysis from three different brokers, quotes from New York, North Carolina and Connecticut. In each state four different health care providers that we compare quotes for different packages so that we can offer our employees the most competitive care and you know – it doesn't matter which broker you talk to from which state, they all tell you the same thing that the range of cost increase is 3 to 6 percent per year. "

"This year being the first year 3 to 6 percent and we'll see how much it is in the coming years. But its definitely leading to health care cost increases," added Hoskins.

Hoskins said that despite the increases, he is, "committed to giving my employees the best possible benefit I can - regardless of Obamacare."