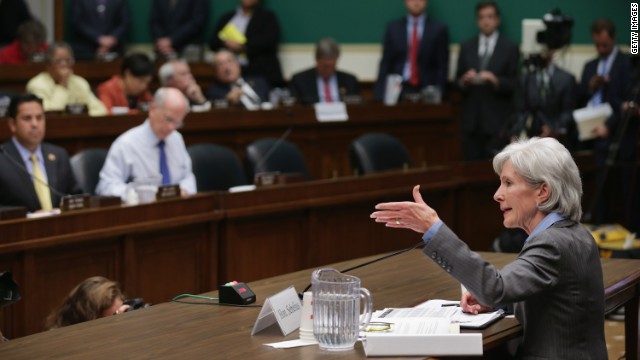 White House on Sebelius hearing: GOP ‘did us a favor up there’

(CNN) - References to “The Wizard of Oz.” A poster of "bros" doing a keg stand. And that shout-out to "Red Solo" cups.

White House officials are all but thanking Republicans for some of the more entertaining moments from Wednesday's House hearing featuring Health and Human Services Secretary Kathleen Sebelius.

"They did us a favor up there today," one senior White House official told CNN, arguing Sebelius' performance helped, not hurt, the administration's efforts to steer the troubled Obamacare program back on track.

The secretary's apology for the technical problems plaguing http://www.healthcare.gov, which she described as a "debacle," was all a part of the administration's attempts to take responsibility and turn the corner in what has been one of its worse news cycles, the official said.

Further evidence of the taking ownership mission was President Barack Obama's speech in Boston. It was the President's first attempt, the official noted, to offer a defense of his now infamous health care pitch: "if you like your plan, you can keep it."

The President said Americans who are now receiving cancellations from their insurers because their plans fail to meet Obamacare standards will find coverage under the new law.

"Since the law was passed, if insurers decided to downgrade or cancel these substandard plans, what we said under the law is well you've got to replace them with quality comprehensive coverage," Obama said.

The president did not address criticism from independent fact-checkers who have slammed the "if you like your plan" selling point as misleading.

Republican leaders in Congress are far from satisfied with the President's event in Boston.

“It’s beyond disappointing that, despite the evidence, the President continues to mislead the American people about his health care law," House Speaker John Boehner said in a statement.

"The President promised that if you like your health care plan, you can keep it. It wasn’t true when he said it years ago, and, as millions of Americans are finding out, it’s not true now," Boehner added.