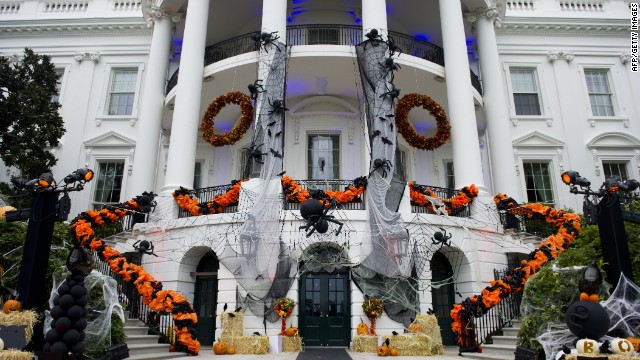 'Scary' Halloween tweets from the right and left

(CNN) - The last day of October offers a chance for a different kind of political commentary, with some politicians and political brands sharing what they find "scary."

Tennessee Lt. Gov. Ron Ramsey, a Republican, feels that "Everyone is entitled to one good scare on Halloween," according to a tweet from an account bearing his name.

"This one gets me every time. Happy Halloween!" the tweet continues. It then proceeds to connect to an image link, a link that once clicked, leads the user to a photo of President Barack Obama.

Everyone is entitled to one good scare on Halloween. This one gets me every time. Happy Halloween! http://t.co/DhesJydn6P

Organizing for Action, the pro-Obama group spun off from his re-election campaign, chose Thursday to tell people to not "let anyone scare you out of getting affordable health insurance."

Don't let anyone scare you out of getting affordable health insurance. #GetCovered pic.twitter.com/l85M6jeh8k

Tea Party Patriots, one of the largest and most influential national tea party groups, expressed fear of the national debt.

Happy #Halloween from the TPP! pic.twitter.com/XqcE5kWg8H

The official twitter account of the Democratic National Committee, for its part, is scared of GOP Sen. Ted Cruz of Texas becoming president.

Now, THIS would be terrifying. Happy #Halloween everyone. pic.twitter.com/GZBt269Wfy

Democratic Sen. Patty Murray of Washington state is scared of the partial government shutdown, which she blames on Republicans.

Many Republicans continue to be scared of what they see as catastrophically harmful effects of Obamacare. Former Sen. Jim DeMint of South Carolina, who now heads the influential conservative organization Heritage Foundation, tweeted an interview between him and GOP Sen. Mike Lee of Utah. The movie that most resembles Obamacare? "The Blob," says Lee.

The National Republican Congressional Committee is afraid of a "Haunted House," like the one they think Congress would turn into were Democrats to regain majority control of the House of Representatives in next year's midterm elections.

Want to see what a real “haunted House” looks like? Give @NancyPelosi and Dems the majority in 2014: http://t.co/dFuTxi1f02